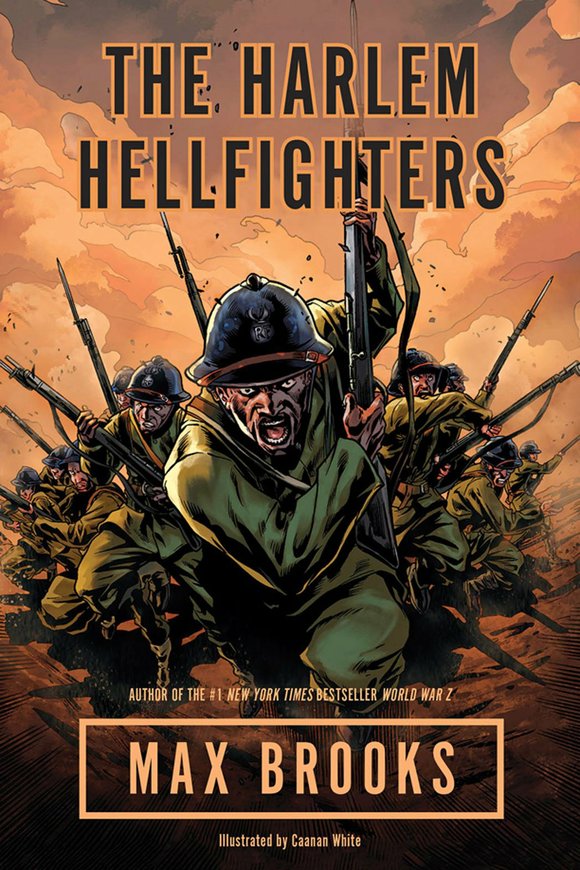 Action, drama, and a solid story—what more could you want from a graphic novel?

Max Brooks, author of the number one New York Times bestseller World War Z, has put together a truly extraordinary piece of work in The Harlem Hellfighters ($16.95, Broadway Books, 2014, 272 pages.) This World War I story is a fictionalized account based on the struggles of the 369th Infantry Regiment—the first African American regiment designated to fight in the war in 1918.

For those who are not familiar with the 369th Infantry Regiment (and other Black soldiers during that time period), these soldiers experienced strife and turmoil years before they reached the front lines. Blacks and Whites were still segregated in America, and military life was not much different. Black soldiers received no real weapons or uniforms and were provided minimal training consisting mainly of chores and hard labor, unlike the much more involved training provided to White soldiers. They also experienced constant attacks from their “fellow” White soldiers, police officers, and ordinary citizens. Black soldiers were being lynched, shot, burned and stabbed by their own soldiers and the people they were trying to protect, yet they were expected to not retaliate. From the Black soldiers’ perspective, this war was all about the White man running out of people to conquer, so they turned on themselves.

After a year of being kept from entering the war, the 369th was shipped overseas, only to find out that they would still be kept away from the fighting. The French military, however, enlisted America’s Black soldiers to fight alongside them, offering the soldiers adequate training, weapons, and equality and fair treatment.

Although the comic is illustrated in black and white, artist Caanan White does not fail to convey the extremely graphic and violent nature of war. From the smallest knife wound to the largest mortar explosion, White supplies artistry that leaves the reader captivated with every turn of the page. The attention to detail is exquisite. White’s meticulous illustrations coupled with Brooks’ mastery of storytelling helps the reader understand what the war was like for these suppressed Black soldiers, and how devastating it was to witness death on such a large scale.

Brooks features many fictional characters along with Black historical figures such as Horace Pippin (a prominent artist of the early 20th century) and James Reese Europe (one of the founding fathers of Jazz). The character development and action both deserve praise as Brooks has proven to have assembled a graphic novel for the ages.

The struggle for Black soldiers to gain the respect of their White counterparts was a true test of endurance, faith in each other, and courage from within. This marriage of gripping storytelling and vivid imagery takes readers on an incredible journey that they will not soon forget: the journey of The Harlem Hellfighters.