Rains from storms have killed at least 80 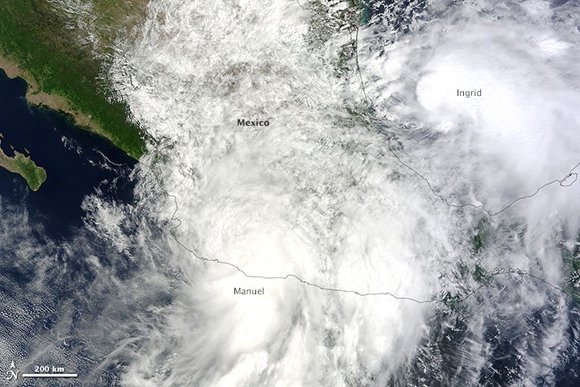 Both Hurricane Ingrid and Tropical Storm Manuel came ashore over Mexico on September 15 and 16, affecting two-thirds of the country at once. The country experienced a rare double strike as two storms moved ashore simultaneously, one from the Pacific and one from the Atlantic. The last time such an event occurred was 1958, reported the Weather Channel. NASA

Mexico’s president said dozens of people were missing after a mudslide that buried homes as Manuel pounded the country’s Pacific coast.

The mayor of the town, which is located about 50 miles west of Acapulco, told CNNMexico that 15 bodies had been recovered and at least 70 people remained buried under mud that buried 20 homes.

Manuel, which strengthened into a hurricane Wednesday evening, was one of three storms bringing devastating deluges and flooding to Mexico. At least 80 people were killed in the storms, Mexico’s interior ministry said.

In the Pacific resort city of Acapulco, thousands of tourists were stranded.

“Unfortunately, this took us by surprise,” Veronica Garcia told CNN en Español. “It rained uncontrollably. The streets flooded and we had to stay inside our beach house.”

Garcia said her family was stuck on the home’s second floor because of flooding. As if that wasn’t enough, they had to face an agonizing decision: who should be rescued?

The Garcias were among some 40,000 tourists left stranded or cut off by weather that has claimed dozens of lives during a holiday weekend.

As the water rose, Garcia and her four family members waited nervously on the upper floor for help, but no rescuers appeared to whisk them to safety.

When local volunteers finally arrived with a small kayak, their relief was short-lived. Rescuers said the boat would only fit two family members.

It was decided that Garcia would be rescued, along with one of her sons.

A second round of agony followed as Garcia spent two days in a shelter before the rest of her family was rescued and everyone was reunited.

The Garcias’ story was only one of countless examples of tourists whose vacations were interrupted by severe weather. Mexico was being pummeled from nearly all sides Wednesday as Manuel, the remnants of Hurricane Ingrid, and a new area of low pressure threatened most of the country with flooding or rain.

Mexico’s interior ministry said Wednesday that the storms are responsible for at least 80 deaths nationwide.

And a state-by-state tally indicates the toll could be higher.

“Acapulco is practically incommunicado,” he said.

On Wednesday, the rain eased and rescue operations and evacuations of tourists quickened.

Manuel strengthened into a hurricane Wednesday evening and, as of 5 p.m. (8 p.m. ET), was churning with maximum sustained winds of 75 mph about 20 miles (30 km) southwest of the Pacific coastal city of Altata, Mexico, the National Hurricane Center said.

Manuel is expected to produce five to 10 inches of rain over the state of Sinaloa, the National Hurricane Center predicted.

While Manuel cast a shadow over the Pacific coast, a low pressure area on the Gulf side — the remnants of Ingrid — continued to batter the coastal states of Tamaulipas and Veracruz.