Company hopes new jet will save the Air Force a bundle 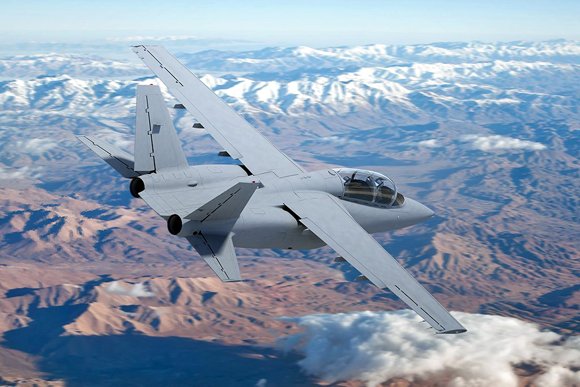 A joint venture between Texas companies Textron and AirLand Enterprises have developed a low-cost attack jet called the Scorpion that it is marketing to the U.S. military. Textron AirLand

Could the U.S. Air Force’s newest warplane be something the service didn’t even ask for?

That’s the hope of a joint venture between Textron, the makers of Cessna airplanes and E-Z Go golf carts, and AirLand Enterprises, a small company formed by former defense and aerospace executives hoping to market a low-cost aircraft to the U.S. military.

The joint venture, Textron AirLand, introduced its Scorpion aircraft Monday during a trade show in Maryland. The two-seat, twin-engine jet is designed to tackle low vulnerability missions at a fraction of the cost of the planes that now take on those assignments.

According to a report from Aviation Week, F-16s, which are currently used in many of those roles, cost about $25,000 an hour to operate. Textron AirLand’s goal is for the Scorpion to perform those missions at almost a tenth of that cost, Aviation Week said.

“We began development of the Scorpion in January 2012 with the objective to design, build and fly the world’s most affordable tactical jet aircraft capable of performing lower-threat battlefield and homeland security missions,” Textron Chairman and CEO Scott Donnelly said in a statement.

The company hasn’t said how much each Scorpion will cost to make, but says it isn’t breaking any technological frontiers with it.

“We relied on commercial best practices to develop a tactical jet platform with flexibility and capabilities found only in far more costly aircraft,” Donnelly’s statement said.

Former Air Force Secretary F. Whitten Peters, an adviser to and investor in AirLand Enterprises, said the Scorpion has cost the government nothing so far, in a budget environment where the Pentagon is trying to save every nickel it can.

“In an impressively short time, the joint venture has designed and built a capable and mission-ready aircraft with no up-front government funding. We believe Scorpion will fill a critical price and performance gap in the tactical military aircraft market,” he said in a statement.

Peters told Aviation Week the Scorpion could save the Pentagon $1 billion a year in fuel costs alone.

The Scorpion will be able to carry 3,000 pounds of weapons at speeds up to 517 mph, according to the company’s website. The plane’s ceiling is 45,000 feet.

Besides looking for sales to the U.S. Air Force, the company hopes to market the Scorpion overseas.

The jet’s first flight is expected before the end of the year, the company said.