What does limited action mean? 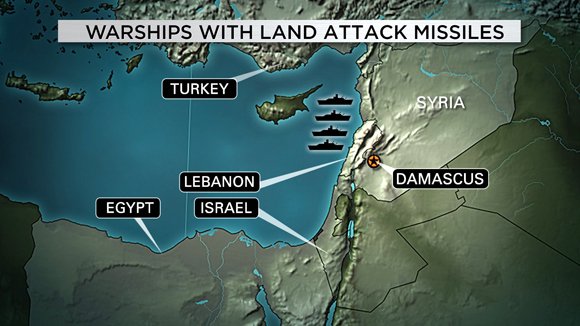 Cruise missiles fired from one of four U.S. Navy destroyers deployed in the Mediterranean Sea could be used to strike Syrian "command and control" facilities.

President Barack Obama stepped on a big limb when he threatened “limited action” against Syria because the country allegedly used chemical weapons against their own people. There are international bans against the use of chemical weapons, with Syria one of few countries not supporting the ban.

Chemical weapons allegedly killed more than 1,400 Syrians, and the ongoing civil war may have killed as many as 100,000. President Obama announced his willingness to act on Syria’s domestic chemical intrusion before Labor Day, but he has now backpedaled and asked for Congressional input in his decision. What will he do if Congress says no? Will he face the international community conceding that he has less power than he thought, or will he go ahead and take military action without congressional approval?

Reportedly, U.S. troops in the Middle East were ready to follow the orders of the Commander-in-Chief before they got orders to slow down any action. Perhaps President Obama is finally listening to the sentiment of the American people, who, according to several polls, do not support action against Syria. Congresswoman Barbara Lee (D-CA) and dozens of other members of Congress sent the president a letter urging debate on any military action against Syria. Does the urgency of a strike against Syria recede over time?

Have we learned the lessons of Iran, Afghanistan, and, yes, Vietnam? In the last case, “simple” military action led us into a war that lasted for nearly a decade, and the loss of tens of thousands of lives. The “end” of that war was hardly decisive, with a withdrawal that didn’t so much save the day as salvage the our nation’s bruised ego.

From Iraq, we must remember that verification of the use of chemical weapons is key to any action. I’ll never forget Secretary of State Colin Powell holding up a small container and saying, “this could be anthrax.” Turns out, it wasn’t. Based on that vivid display, we stepped up our action against Iraq, and a decade later we are still there.

General Powell said that if we broke it, we have to fix it. We’ve not fixed it—we are withdrawing, and billions of dollars and thousands of lives later, the situation is almost as murky as it was when we entered that country.

What will we do if Syria chooses to respond to our “limited” military action? Action and counteraction are the first steps to war. We aren’t ready for that! We’ve got existing military commitments, and an already-challenged budget, something not often mentioned in the face of this impending crisis. Military experts say Syrian action could cost “about” $100 million. Depending on escalation, we could easily end up in billion-dollar territory.