No gun was found in Monday’s alleged incident 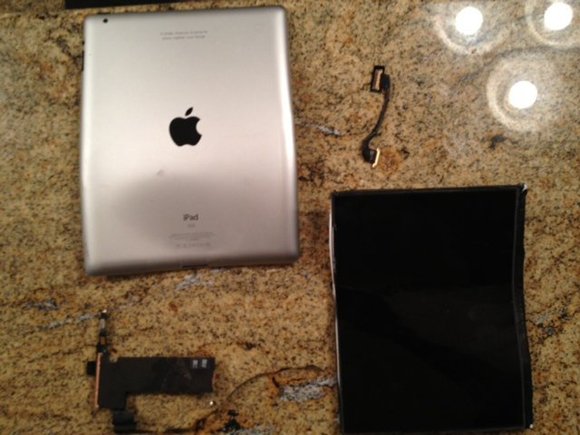 An iPad used to shoot video of a confrontation that allegedly erupted Monday between George Zimmerman and his estranged wife, Shellie, and her father might prove key in determining whether charges will be filed, police said Tuesday in Lake Mary, Florida. "Unfortunately, the iPad is in several pieces," police spokesman Zach Hudson told reporters about the device, which he said George Zimmerman had damaged.

An iPad used to shoot video of a confrontation that allegedly erupted Monday between George Zimmerman and his estranged wife, Shellie, and her father might prove key in determining whether charges will be filed, police said Tuesday in Lake Mary, Florida.

“Unfortunately, the iPad is in several pieces,” police spokesman Zach Hudson told reporters about the device, which he said George Zimmerman had damaged.

The incident comes two months after Zimmerman, a neighborhood watch volunteer, was acquitted of second-degree murder in the shooting death in nearby Sanford of Trayvon Martin, a 17-year-old unarmed youth.

Police have sent the pieces of the iPad for analysis, Hudson said. “We want to get all the information, the footage, off it.”

It was not clear who, if anyone, would be charged in the case, he said. “It depends on what the iPad has on it,” he said. “What that footage looks like.”

No charges were filed after the incident on Monday afternoon, when police answered a 911 call from Shellie Zimmerman during which she said her husband had threatened her and her father with a gun.

“There was no gun found,” Hudson said. “There was no weapon, nor was there any weapon involved. Nobody ever saw a gun. A gun is definitely not part of any evidence in this particular case.”

Shellie Zimmerman’s reference to a gun during her call to 911 is not likely to result in any charges, he said.

“Any time you have a divorce, emotions are going to run high,” Hudson added. “In this case, obviously, that was happening and, unfortunately, you had an incident. We need to find out and determine if a crime was committed during that incident.”

No one was injured at the house, he said. “They put hands on each other. I don’t know if that was fists or pushing.”

Shellie Zimmerman and her father, David Bryant Dean, had gone to the house she had shared with George Zimmerman to pick up some of her belongings.

The Zimmermans had texted Monday morning, and she told him she was going go the house, according to a person with whom the family shared the texts.

George Zimmerman and a friend also went to the house, where he got into a heated discussion with Dean, Zimmerman’s attorney, Mark O’Mara, told CNN on Monday. Police said it was then that Zimmerman broke the iPad.

“There was heightened emotion, and a disagreement took place,” O’Mara said Monday. He added that Shellie Zimmerman no longer lives at the house, which is owned by her father.

O’Mara has since announced that he will no longer represent Zimmerman.

Shellie Zimmerman’s divorce filing last week in Seminole County came after she pleaded guilty to perjury on August 28 for lying about the couple’s finances during a bond hearing in April 2012. She had said she and her husband were broke, when they had collected about $135,000 in donations from supporters.

Since his acquittal on July 13, George Zimmerman has returned several times to the headlines. In late July, he helped a family escape from an overturned SUV. And he has been pulled over in traffic twice. The first time, he was given a verbal warning for a traffic violation in Texas and reportedly told officers he had a firearm in his glove compartment. The second time was in Florida last week, when he was issued a $256 ticket for speeding.

Under Florida law, it is up to police to decide whether to press charges for domestic battery.