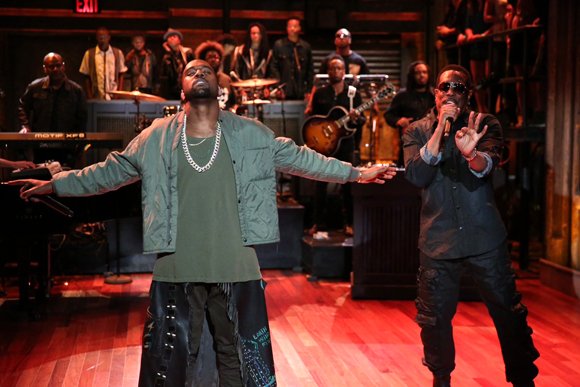 On Monday night, September 9, 2013, Kanye West swung by "Late Night with Jimmy Fallon" with last-minute plans to perform "Bound 2" from his album, "Yeezus." Smartly, he orchestrated his rendezvous to include The Roots and Charlie Wilson. Lloyd Bishop/NBC

That Kanye West is always so full of surprises.

On Monday night, the rapper swung by “Late Night with Jimmy Fallon” with last-minute plans to perform “Bound 2” from his album, “Yeezus.” Smartly, he orchestrated his rendezvous to include The Roots and Charlie Wilson.

“Cool thing about doing a show in NYC — anyone can drop by,” host Fallon tweeted ahead of Monday night’s show. “@KanyeWest surprised us and performed ‘Bound 2’ tonight on Late Night! #nojoke”

We’re not quite sure what West was wearing, but don’t let it distract you from the first-ever live rendition of “Bound 2” — or the rapper’s sly response to Ray J right off the top.

“Brandy’s little sister lame, and he know it now/When a real brother hold you down, you’re supposed to drown,” West rhymed, perhaps offering payback to girlfriend Kim Kardashian’s former flame after Ray J made a song perceived to be about her called “I Hit It First.” (For the record, though, Ray J has maintained that “I Hit It First” is not about his prior sex tape partner.)

West seemed to be energetic and in good spirits during the set, which is a positive sign for fans anxiously waiting to purchase tickets to his “Yeezus” tour with Kendrick Lamar.

The journey kicks off in Seattle on October 19 before winding its way across North America with 22 additional stops, concluding in Houston on December 7. Tickets to the “Yeezus” tour go on sale September 13 — the day after tickets to the North American trek of Jay-Z’s “Magna Carter” world tour will be available for purchase. (Thankfully, Hov’s tour doesn’t begin until November 30, so no worries about double-booking.)