North Korea: Reality vs. the world according to Dennis Rodman 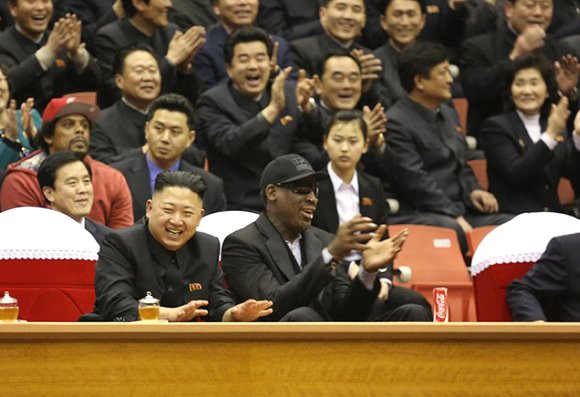 Former Chicago Bulls' basketball player Dennis Rodman thinks he should be in the running for a Nobel Peace Prize following his meeting with North Korean leader Kim Jong Un earlier this year.

In The World According to Dennis Rodman, North Korean leader Kim Jong Un, whom he just saw on his second trip to the country, is quite likeable.

“He has to do his job, but he’s a very good guy,” Rodman said Monday at a news conference, announcing plans for a “basketball diplomacy” event that will involve players form North Korea.

Meanwhile, Kim presides over one of the most repressive regimes on Earth.

As Human Rights Watch puts it, Kim’s succession as supreme leader after the death of his father, Kim Jong Il, in December 2011, “had little impact on the country’s dire human rights record.”

People are subjected to torture and thrown into prison camps based on political charges. Those who have managed to escape describe horror that includes beatings, starvation and executions.

As CNN has reported, Kim Jong Un appears to have changed nothing in the camps.

U.S. citizen Kenneth Bae knows first-hand. He’s currently in one, charged with “serious crimes” and sentenced to 15 years of hard labor for allegedly trying to bring down the government through religious activities. Bae’s family says he owned a tour company and was in North Korea for work.

The accusations against him were spelled out on state-run media, which is the only kind of media that “very good guy” Kim Jong Un and his country allow.

Par for the course in North Korea, where people have no freedom.

“The judiciary was not independent and did not provide fair trials. There continued to be reports of severe punishment of some repatriated refugees and their family members. There were reports of trafficked women among refugees and workers crossing the border into China.

“The government made no known attempts to prosecute officials who committed human rights abuses.”

Meanwhile, much of the country starves.

More than 25% of North Korean children under the age of 5 suffered from chronic malnutrition in 2012, according to the National Nutrition Survey of North Korea, a report backed by UNICEF, the World Food Program and the World Health Organization. The report also found nearly one in three women suffered from anemia.

Rodman: Come with me

In The World According to Dennis Rodman, journalists would realize that his rosy description of Kim is really the right one, if only they’d go over there and see for themselves.

“You write what you hear, but you don’t see what you write,” Rodman complained, saying he wants to bring a journalist on one of his trips to visit his friend.

Yes, that’s the problem, Mr. Rodman. North Korea is aching for journalists to roam freely around the country and report to the world what things are really like.

“My military minder tells me to turn my camera off, and it soon becomes clear why,” CNN’s Paula Hancocks wrote last month on a trip to the “hermit kingdom.”

“The poverty I see through the bus window is not the view of North Korea the regime wants to be seen. ... Buildings are in disrepair; some barely look inhabitable. Residents of this small town walk or sit by the side of the road, many seeming to have little to do. A number of official-looking men dressed in brown Mao suits stand silently on street corners. ... Despite the driver traveling as quickly as possible through these inhabited areas, you could still sense the local community being monitored.”