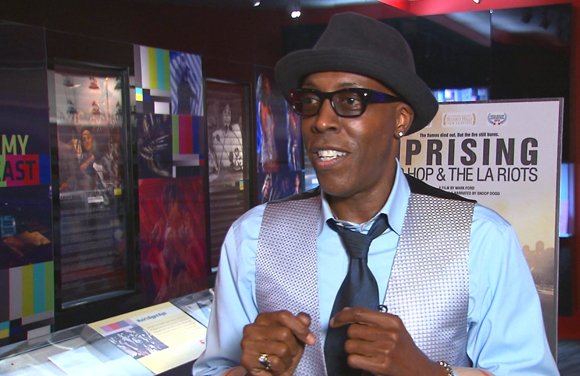 On Monday, September 9, 2013, nearly 20 years after his original run, 57-year-old entertainer Arsenio Hall heads back to TV with a new show, "Arsenio."

Aimed at a hip, young demographic, “The Arsenio Hall Show” was famous for its trademark “woof woof” audience chant and never-know-who-might-stop-by guest list. The show ran from 1989 to 1994 and boasted memorable moments, some of which have become a part of pop culture lore: Bill Clinton playing the saxophone during the ‘92 campaign; Magic Johnson’s first interview after being diagnosed with HIV; and Hall’s tense show the night the Los Angeles riots broke out.

On Monday, nearly 20 years after his original run, the 57-year-old entertainer heads back to TV with a new show, “Arsenio.” Where has he been? How will he carve out his own niche in a very crowed late night field that includes Leno, Fallon, Letterman, Kimmel and Stewart? To paraphrase a certain someone, “These are the things that make us go ‘hmm.’”

CNN caught up with Hall at Hollywood’s Sunset Bronson Studios on the set of the new show and got the inside scoop on his big return.

CNN: What have you been up to since we last saw you on late-night TV?

Arsenio Hall: I have been working hard in just a different element of life, trying to balance my own and do some things that are beyond show business and beyond rooms and (studio) lots like this.

I left this business for something I didn’t even know I was seeking. I just knew it wasn’t in my schedule from sun up to sun down in Hollywood. I left the show for probably balancing my life — I wanted my relationships to be different. I wanted to be with my family and my woman. It was a point where I felt I don’t want to leave this earth without a kid. There were a lot of things going on...

I want to do all those things that I wish my dad could have done with me. My mom and my dad worked very hard when I was young; I was a latch-key kid. I not only wanted to have a kid; I wanted to do it a certain way.

CNN: How will your new show be different from your late-night competitors?

Hall: The good thing about the second time around, there are people who know me, and those 35-year-olds can tell their children, but I’m about to jump back into the culture and I’m the same Arsenio and I just give a different persona to a late-night talk show.

Some will love it, some will hate it. But you look for people to choose you because of the questions you ask, because of the bookings you have, because of the comedy you do ... You’re choosing what you want people to do with your public figures, your celebrities, your pop and hop stars. And everybody kind of knows what I do and how I do it, and I hope some people will join me for some nights.