Nokia gets into the tablet game 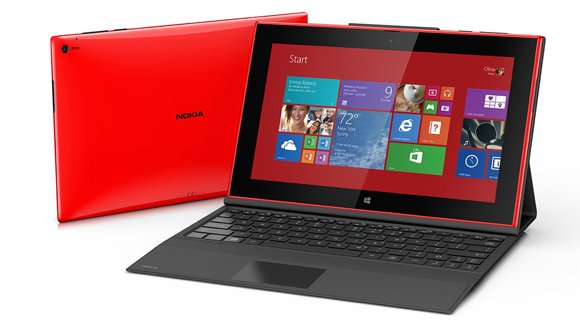 Nokia is getting into the tablet business. The company announced a new 10-inch tablet called the Lumia 2520 on Tuesday at a press event in Abu Dhabi. The Windows RT device is Nokia’s first full-sized tablet.

The Finnish company is also going bigger with its smartphone line. It is releasing a new pair of colorful, big-screen smartphones: the 6-inch Windows Phone 9 Lumia 1520 and the lower-end 1320.

The Lumia 2520 tablet will cost $499 and run Windows RT 8.1, a limited variation of the Windows 8 operating system that doesn’t include the classic desktop interface, just the tile-based touchscreen side. The tablet gets 4G LTE, has a 2.2 GHz Quad Core processor and includes a 6.7 megapixel back-facing camera. The company says it has upped the screen’s peak brightness so it’s extra visible outdoors in direct sunlight.

Six inches is a hefty size for smartphones, but Ifi Majid, Nokia’s head of product marketing for North America, said the size was key because it’s the largest a phone can go and still be held with one hand. While they haven’t yet taken off in the U.S., “phablet” devices are a bigger hit in developing markets where the larger size is considered a status symbol.

This is Nokia’s first big product rollout since it was announced that Microsoft was going to purchase part of the company. The $7.2 billion deal, which will include Nokia’s devices and services businesses, is still pending. It’s unclear what kind of different direction Nokia’s products will take when Microsoft is fully in charge, and where the new 2520 tablet will fit in with Windows own similar Surface line.

Apple is the leading tablet manufacturer in the world, followed by Samsung, but all the major manufacturers are eager to get in on the growing market. Though Microsoft has been pushing its own Surface tablets and touchscreen-ified operating system, Windows 8, it still trails far behind iOS and Android tablets.

Nokia was once the top mobile phone manufacturer in the world. It still holds on to a sizable chunk of the feature phone market, but is struggling to stay competitive against smartphones from Apple, Samsung, and other companies.

Instead of making an Android-based smartphone like most non-Apple companies, Nokia took a bet on a third operating system, Windows Phone 8. Colorful and simple, but with an anemic selection of apps, Windows Phone 8 has struggled but slowly grown since making its debut a year ago. Getting big name apps has been one of the operating systems biggest challenges. Nokia says photo-sharing app Instagram will finally come to the platform in the next few weeks.

There is still a market for less advanced phones that can last more than a day on a single battery charge. Nokia also announced three new Asha devices on Tuesday. Asha is Nokia’s super simple, very cheap phone line. The tiny handsets cost between $60 and $99 and can make calls and text, run a few apps and even connect to the internet. Aimed at developing markets, they can also hold a charge for up to a month.