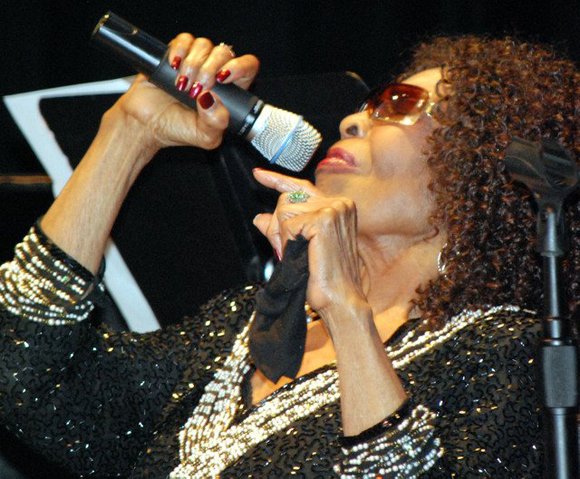 Jazz vocalist Gloria Lynne, whose career included dozens of albums and whose signature song was "I Wish You Love," has died, her son said. She was 83. Lynne died Tuesday night, October 15, 2013, at Columbus Long-Term Acute Care Hospital in Newark, New Jersey, of a heart attack.

Jazz vocalist Gloria Lynne, whose career included dozens of albums and whose signature song was “I Wish You Love,” has died, her son said.

Born in New York in 1929, she sang as a child in church, then won an amateur contest at age 15 at Harlem’s Apollo Theater, said her son, P.J. Allen.

The prize: $15, $5 of which she lost when her mother slapped the bills out of her hand upon discovering she had entered the contest without telling her.

Soon, she was signed by Everest Records.

“But her real break came with Harry Belafonte’s ‘Strolling ‘20s,’” Allen said, referring to the 1966 television special that included Duke Ellington, Sidney Poitier, Nipsey Russell, Sammy Davis Jr. and Diahann Carroll. “After that, she got the song, ‘I Wish You Love,’” by Charles Trenet.

Lynne was also an accomplished writer, said Allen, who cited her autobiography and said she was working on a sitcom to have been called “Bus Buddies” at the time of her death. It was “about the time in her life when she rode a bus, when she was out of the business for a little while,” he said. “She met a lot of people, some of whom were very funny.”

Though her songs were widely popular, Lynne made her living neither through her writing nor through her nearly 400 recordings, but through live performances, Allen said. “She got ripped off,” he said about the recordings. Everest has since closed.

Still, the lack of payoff “never soured her on the business,” he said. “She once quoted to me a line from the movie, ‘All About Eve.’ One of the characters says, ‘At least you get applause.’ That was always her.”

Lynne herself cited the problem in a 2009 interview for the Apollo Theater and Columbia Center for Oral History Collection. “I have never made any money making records, and I’ve made a bunch of them,” she said.

But, she added, she always had a response when people would ask her why she continued to sing.

“I said because it was my way of getting music out of me onto the public. Other than that, I wouldn’t have anything. If I had stopped and said, ‘Well, no, they’re not paying me. I’m not going to do any---‘ I couldn’t do that. I couldn’t throw away what gift I had because of the money. So God gave me another way. I worked for Bank of America, I did temp work, anything I could do.”

Lynne last performed on August 27 at 54 Below in New York, said Todd Barkan, who produced the show and knew her for 40 years.

“She was really a giant of American jazz singing, but she never really got the recognition she so richly deserved, and lived the last 20 or 30 years of her life in relative obscurity,” he said. “It’s a brutal business and Gloria was a victim of that brutality, for sure. But she was one of our greatest singers, she was a true angel, no doubt about it.”

“Gloria Lynne was one of the great female jazz vocalists & lyricists of our time,” said blues legend B.B. King. “She left the world with her beautiful music and will be missed by all the people whose lives she touched. Gloria was truly a jazz legend.”

Publicist Dell Long, who worked for Lynne since the 1990s, said funeral plans were being finalized.

“She lived her song, ‘I Wish You Love,’” Long said. “She’s all about pure love. Her voice never petered. To this day, she sang those original notes like she did in her teens and 20s.”

Long added, “She said when she sang the notes she heard them for the first time.”