Oreos as addictive as cocaine in lab rat study 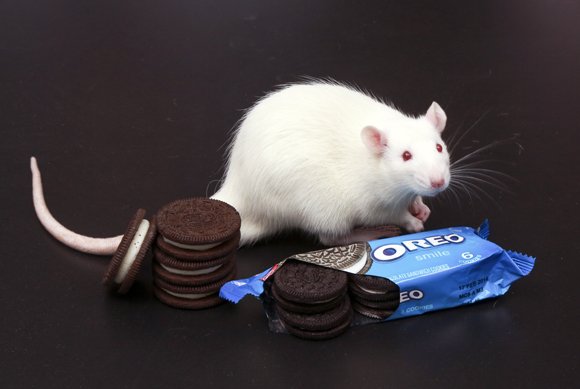 Students and a professor of neuroscience at Connecticut College said they have found evidence that shows Oreo cookies are just as addictive as cocaine - at least in lab rats. The study was designed to show that there is the potential for addictiveness of both high-fat and high-sugar foods, and Professor Joseph Schroeder and his students found rats had an association between the pleasure of eating Oreos and a specific environment was the same as cocaine or morphine and a specific environment.

Anyone who’s ever eaten an Oreo knows how difficult it can be to eat just one.

Scientists have long suspected that our brains crave junk food in the same way they crave other pleasurable substances, such as illegal drugs. Previous studies in rodents and in humans have shown the same area of the brain that becomes more active when people use drugs, also shows increased activity when study participants consume, or even look at, high fat, high sugar foods like ice cream or bacon.

New research from undergraduate students at Connecticut College adds to the growing evidence suggesting that food can be addictive. The students were interested in understanding how the availability of junk food in low-income areas has contributed to America’s obesity epidemic.

“Even though we associate significant health hazards in taking drugs like cocaine and morphine, high-fat, high-sugar foods may present even more of a danger because of their accessibility and affordability,” study designer and neuroscience major Jamie Honohan said in a statement.

The student researchers used a maze with two sides to test their theory. On one side of the maze, they gave the rats Oreos; on the other side, the rats got rice cakes. The rats were then allowed to choose which side of the maze they wanted to explore.

The researchers recorded the amount of time the rats spent on each side. They then compared the times to a similar experiment where the rats were given an injection of cocaine or morphine on one side of the maze and a shot of saline on the other.

The researchers also analyzed the Oreos’ effect on the rats’ brains by looking at the number of neurons in the nucleus accumbens — the brain’s “pleasure center” — that were activated while eating.

The lab rats conditioned with cookies spent just as much time on the “drug” side of the maze as the rats conditioned with cocaine or morphine, the researchers say. “This, by itself, is not surprising or novel,” Schroeder told CNN in an e-mail. But researchers also found that the rats eating Oreos experienced more pleasure than the animals being injected with drugs, as measured by activation changes in the nucleus accumbens.

“Taken together, these finding support the hypothesis that consumption of high fat/sugar foods can lead to addictive behaviors and can activate the brain in a similar manner as drugs of abuse,” Schroeder said. “This may, in part, help us to understand why individuals who have trouble controlling their food intake, especially when food options are limited to high fat/sugar options, are more susceptible to obesity.”

These results have not been published in a peer-reviewed scientific journal. And research in rats does not always translate to humans. It would be difficult to get approval to conduct the same experiment on humans as it would require giving illegal substances to study participants.

While Oreos were used in the study, the experiment was done to illustrate the effect any food high in sugar or fat could be having on your brain.

This study helps us understand why it’s sometimes difficult to resist junk food even though we know it’s bad for us, Schroeder said. It might be hard to give up your favorite cookies cold turkey, so follow the golden rule of nutrition: Everything in moderation.