Assembly Bill 60 will allow undocumented immigrants to apply for licenses 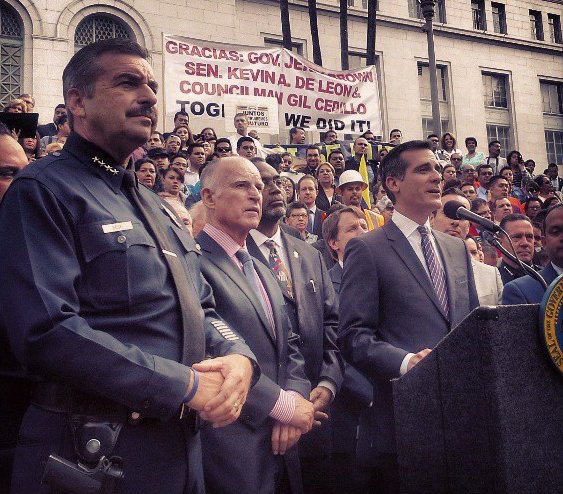 LOS ANGELES, Calif. — With hundreds of labor and immigrant-rights activists looking on, Gov. Jerry Brown sat at a desk outside Los Angeles City Hall today and signed into law a bill that will allow immigrants in the United States illegally to obtain California driver’s licenses.

“When people ask, what does history feel like? It feels like this,” said Mayor Eric Garcetti, who hosted the signing ceremony.

The bill calls for the provisions to go into effect by January 2015, but Brown can choose to push up the start date.

Brown said the bill, which lifts a years-long restriction, “is about getting into a car without fear of (Los Angeles Police Chief) Charlie Beck’s men and women take it away from you.”

“He’s got to follow the law, too, so we’re helping him out by making this law,” Brown said.

One speaker after another — the lineup included top state legislators and Los Angeles Archbishop Jose Gomez — said the driver’s license law will heighten road safety by requiring all motorists, regardless of their immigration status, to pass driving tests and purchase insurance.

It will also allow undocumented immigrants to freely go about their daily lives, whether it is going to work or picking up their children from school, they said.

City Councilman Gil Cedillo, a former Democratic state lawmaker who is known as a longtime champion of lifting restrictions on immigrant driver’s licenses — to the extent that he was given the nickname “One Bill Gil” because he proposed the bill nine times — appeared, at first, to be at a loss for words.

“What can you say after 20 years?” Cedillo said before launching into a 10-minute-long speech that included thanking Nativo Lopez, the activist who first told him to “address this issue of immigrants who are now beginning to have their cars taken away from them. That is the simple and modest way history begins and change happens,” Cedillo said.

After years of failures and near-misses, the driver’s licenses bill would have been delayed again if not for some last-minute, serendipitous maneuverings that occurred amid a flurry of activity at the end of the latest state legislative session.

The had bill faced some uncertainty because immigration-reform advocates took issue with the DP mark, which they believe would hurt immigrant drivers by identifying them as being in the country illegally.

But state Sen. Kevin de Leon, D-Los Angeles took over the bill, originally authored by Assemblyman Luis Alejo, after he made an off-handed remark to Brown about being disappointed the legislation had failed. Brown responded that he supported the bill and would sign it if it passed out of the Legislature.

Brown today contrasted the California politicians who worked in “unison” to get the driver’s license bill passed to the “dysfunction” reflected in the federal government shutdown that was precipitated by a feud in Congress over the Affordable Care Act, the healthcare law passed in 2010.

That fight has also taken some attention away from an immigration bill now pending in Congress. The bill would provide a path to citizenship for undocumented immigrants.

“This is only the first step,” Brown said of California’s driver’s license bill. “When a million people without their documents (are) driving legally with respect to the state of California, the rest of this country will have to stand up and take notice.”

“No longer are undocumented people in the shadows,” he said. “They are alive and well and respected in the state of California.”

AB 60 could also affect Special Order 7, a Los Angeles Police Department policy that relaxed impound penalties on unlicensed immigrant drivers. The city is appealing a Superior Court judge’s ruling that the policy conflicts with state law. Beck rescinded the policy last week to comply with a court order, but city attorneys are hoping to restore the policy soon.