‘Did what he came to do’ 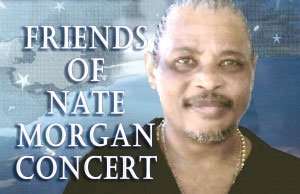 Before his passing, the famed musician suffered through a series of debilitating illnesses including a stroke that temporarily sidetracked his career in 2008. Morgan’s eclectic artistry behind the ivories put him in elite company among other Los Angeles Jazz musicians and solidified his place as a bona fide master of the genre.

In 2002, a community-wide tribute was held in response to Morgan’s failing health at the then newly opened Jatkodd Cultural Fine Arts Center in the Crenshaw District. Over the years since then, various benefit concerts and gatherings have taken place to honor Morgan’s legacy.

Philomine Morgan, his wife of more than 30 years, says she has fond memories of her husband’s loving spirit and playful attitude.

“These last five years he kept me laughing,” she recalled with a chuckle. “He made sure to say ‘I love you’ every morning and every night. He also sang to me every chance he could get.”

She continued, “Before he died, he told me that he has no regrets, that if he passed he did what he came on this earth to do.”

During his final days, Morgan’s diminished health almost required the removal of his arm, Philomine added.

“I couldn’t let that happen” she said earnestly. “He’s not just a musician, he’s an artist. When the doctor told me he might have to amputate Nate’s arm, I said: ‘if you can’t save his arm, don’t wake him up.”

Morgan spent part of the 1970s playing for Rufus and Chaka Khan and collaborated in the early 1990s with rappers Bone Thugs N’ Harmony. He’s also been touted as one of the best kept secrets of the Los Angeles Jazz scene.

Morgan is survived by his wife and their six children. Darius Nathaniel and Deshonda Johnson, and Nymekye, Jabari, Dors and Yusef Morgan.

By Cory A. Haywood