Feeding the homeless on Thanksgiving 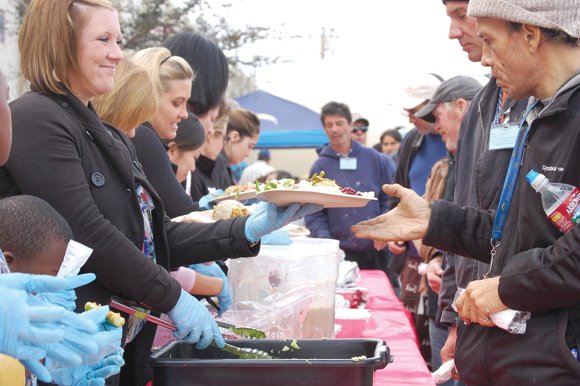 Feeding the homeless for Thanksgivig

Actor Dick Van Dyke and Los Angeles police Chief Charlie Beck will be among more than 300 volunteers serving Thanksgiving brunch at The Midnight Mission to thousands of  homeless or nearly homeless men, women and children.

Food bags and donated clothing will also be distributed. The UCLA football team and coach Jim Mora will join actress Kristen Bell in serving Thanksgiving dinner at the Pink Taco restaurant on the Sunset Strip to more than 500 homeless people receiving services from the Veterans Administration and the homeless services organization PATH.

More than 500 needy individuals will receive a meal and sleeping bags in the parking lot of the Gay and Lesbian Center in Hollywood from Food on Foot, a nonprofit organization that provides Los Angeles’ poor and homeless individuals with meals, clothing and employment assistance.

Between 4,000 and 5,000 needy people will be served Thanksgiving dinner at Union Station Homeless Services’ Dinner-in-the-Park at Central Park in Pasadena. A Children’s Fun Zone will be open from 10 a.m. to 1 p.m. with activities including arts and crafts, face painting, sack races and bean bag tosses.

More than 2,000 people will be served turkey dinners at the 26th annual free Community Thanksgiving Day dinner for homeless and low-income families at Guadalupe Community Center in Canoga Park.

The feast is part of the congregation’s commitment to social action, which also includes its founding role in the North Hollywood Interfaith Food Pantry, which feeds 5,000 people per month, and its Moses Program for Jews with Disabilities.

The first official Thanksgiving was held in the Virginia Colony on Dec. 4, 1619. The traditional meal stems from one held in 1621 by the Wampanoag Indians and the Pilgrims who settled in Plymouth, Mass.

President George Washington issued a national Thanksgiving Proclamation in 1789, his first year in office. He declared a national thanksgiving holiday for the newly ratified Constitution, so people may thank God for “affording them an opportunity peaceably to establish a form of government for their safety and happiness” and for having “been enabled to establish constitutions of government for our safety and happiness, particularly the national one now lately instituted.”

In his Thanksgiving proclamation, President Barack Obama asked Americans to “forge deeper connections with our loved ones,” “extend our gratitude and our compassion” and “let us lift each other up and recognize, in the oldest spirit of this tradition, that we rise or fall as one nation under God.”