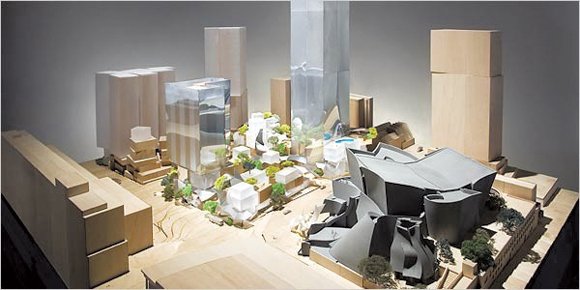 LOS ANGELES, Calif., - After striking out with a previous proposal, a developer today offered county and city officials a revamped plan -- this time designed by architect Frank Gehry -- to build a $650 million hotel, residential and retail complex across from the Walt Disney Concert Hall.

The Grand Avenue project, proposed by the New York-based Related Cos., would transform a 3-acre parking garage bounded by First, Second and Olive streets in downtown Los Angeles into a complex that includes a hotel, a luxury condominium, entertainment venues and high-end shops and restaurants.

Gehry designed the concert hall and came up with an earlier architectural plan for the Grand Avenue project.

In September, the Los Angeles Grand Avenue Authority, which oversees the revitalization of the Grand Avenue area, rejected a design by architecture firms Gensler and Robert A.M. Stern Architects. County Supervisor Gloria Molina, who chairs the authority, complained of the design’s “boxiness” and lack of “architectural interest.”

The new design by Gehry Partners switches the original configuration of the residential and hotel buildings. Instead of a residential tower facing the Walt Disney Concert Hall on Grand Avenue, the new plans feature a plaza tha gives the public easier access to the complex, as well as a 300-room hotel on the corner of First Street and Grand Avenue.

The residential building, which will have both market rate and affordable condos and apartments, was relocated to the other side of the block on Olive Street.

Other elements of the project would be sprinkled across terraces and “rooftop pavilions” along a “gradual slope” from Grand Avenue to Olive Street.

Instead of a phased schedule as was previously planned, the entire project would be built in one go, according to a spokeswoman for Related.

If approved, construction would begin 2015 and be completed by 2019.

The Grand Avenue project attempts to unify various landmarks and cultural institutions around Grand Avenue, including the Walt Disney Concert Hall, the Cathedral of Our Lady of The Angels and the Broad Museum, which is still under construction, Related executives said.

“Our vision for this site, which we share with the County and City of Los Angeles, has always been to create a world class, compelling destination for Angelenos and national and international visitors,” said Related Chairman Stephen M. Ross.

Gehry said their goal is to “enrich” a burgeoning downtown “arts and cultural district.”

“What’s been missing is the excitement and fun of a hotel, nightclubs, restaurants, shops, places to hang out,” he said. “Now our plan has the potential of becoming an incredibly dynamic partner to the Walt Disney Concert Hall and the other arts and cultural institutions on Grand Avenue.”

The Los Angeles Grand Avenue Authority voted unanimously in September to give Related until Jan. 20 to revise its plans for the widely anticipated commercial and residential project. The decision came just hours before an agreement with Related was set to expire at midnight.

Related, which has a 99-year lease at the county-owned 3-acre project site, has invested more than $120 million into the larger Grand Avenue revitalization plans, spending $50 million toward the development of Grand Park and granting development rights to the Broad Museum.

“We have been unwavering in our commitment to Grand Avenue,” said Bill Witte, president of Related California. The current project “will create a vibrant destination that will serve as a northern anchor for downtown” and would join their work on Grand Park, as well as a residential tower being constructed at another site, next to the planned Broad Museum.