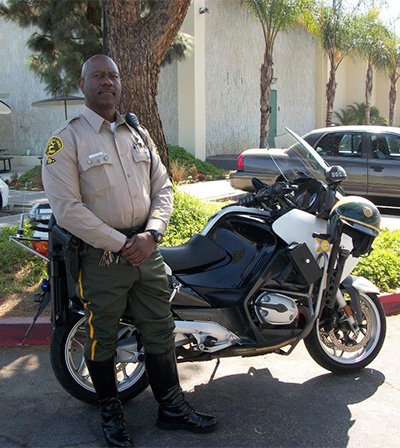 Located in the nation’s capital, the National Law Enforcement Officers Memorial Fund is a nonprofit organization dedicated to honoring the service and sacrifice of America’s law enforcement officers. The Memorial Fund’s Officer of the Month Award Program began in 1996 and recognizes federal, state, and local officers who distinguish themselves through exemplary law enforcement service and devotion to duty.

“The National Law Enforcement Officers Memorial Fund is honored to present Deputy Simmons with our Officer of the Month Award for November 2013,” said Craig W. Floyd, Memorial Fund Chairman & CEO. “To spend each workday interacting with the public and not receive a single complaint in over 20 years is nothing short of amazing, and is a testament to Deputy Simmons’s professionalism and calm demeanor,” he said. “He is most deserving of the Officer of the Month Award.”

Simmons, along with the other Officer of the Month Award winners for 2013, will be honored at a special awards luncheon in Washington, D.C., in May 2014, during National Police Week. In addition, their stories of heroism and service will be featured in the Memorial Fund’s annual calendar.

The most common interaction between American citizens and police officers occurs during a traffic stop to address a violation. Because these encounters often result in a citation, upset citizens often direct their emotional response at the officer tasked with upholding laws. Deputy Sheriff Elton Simmons of the Los Angeles County Sheriff’s Department (LASD) has lived this scenario thousands of times. He knows that, too often, tension can escalate and a simple traffic stop can develop into a more serious matter. With every traffic stop he makes, Deputy Simmons is determined to diffuse the situation, eliminating any unnecessary anxiety for both himself and the driver. He lives and works by a simple code: you earn respect when you offer respect.

Simmons joined the LASD in 1987, and 12 years later became a Motor Deputy. In this capacity, he is responsible for enforcing traffic regulations and enhancing safety for motorists and pedestrians. With a job that some might perceive as unpopular, Simmons is known throughout his department and community for his spotless reputation. In fact, the last time Simmons received a citizen complaint was in 1992. Since that time, he has had over 25,000 interactions with the public.

Simmons’s positive relationship with the public, despite his unpopular responsibilities related to traffic enforcement, is a testament to his demeanor in dealing with the citizens in his jurisdiction. LASD command staff contends that this record — not receiving a single complaint in over 20 years — is highly unusual given the nature of Simmons’s responsibilities. This rare accomplishment highlights his exceptional communication skills and his courteous and polite manner.

Simmons credits his uncle, a pastor from Louisiana, for instilling in him the idea that if a person does good things, is a good person, and treats others well, great things will befall that individual. He lives every day showing simple respect to the individuals he encounters. “Just treat people right, give a smile,” he says. “It’s ‘Hey, how are you doing today?’”

Since the story was featured, the LASD has received numerous messages from people across the country, praising Deputy Simmons.