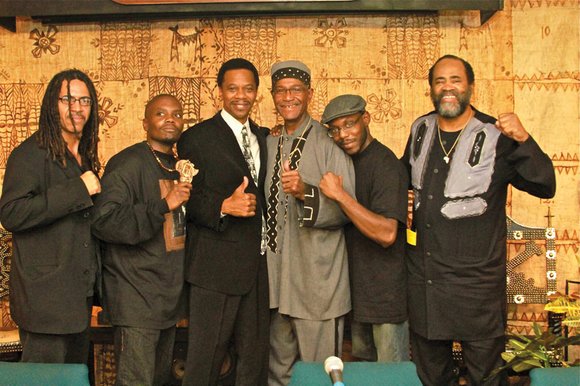 Hosted and moderated by founder Torrence Brannon-Reese, a panel at a symposium on Black manhood, held Sunday at the KRST Unity Center of AfRaKan Spiritual Science challenged four African American males from various walks of life to share their personal stories and philosophical views regarding “The challenges of the Black male today.”

The consensus among panelists suggested that African Americans must become responsible for their communities and rear their young collectively, instilling in them morals, goals, and accountability.

“Education is a tool but it isn’t the only tool; there has to be spiritual accountability, social accountability, and intellectual accountability,” said Solomon Tubbs Foster, a software developer and UCLA graduate. Tubbs’ concern stems from African Americans who leave the Black community, attend major universities but balk at returning and sharing resources with the youth.

“I don’t believe the notion that Black women can’t raise Black males to become men; it happens.“ said Pianky, a local community activist, who explained to the packed audience that he never knew his father but read profound books that helped guide him through adolesence. “When I was deaf, dumb, blind and backward, I read books from insightful Black authors—Baba John Henrik Clarke, Kwame Toure (AKA Stokely Carmicheal), Khalid Abdul Muhammad, and Tupac Shakur. With their teachings, they resurrected me into my African manhood.”

Educator Michael Datcher, said “Talking about the Black male condition is personal for us who are Black men, because we have lived it. We are Black fathers and relatives that we care about.”

Datcher suggested that far too often, ethnicities who have no connection with Blacks tend to lump together a concentration of stereotypes and traits that create prejudice and fear within others. Datcher noted, “We must go beyond the narrow confines of what it means to be Black and male and move to the potentiality of what it means to be Black in spirit and all powerful.”

“. . . is there an illusion or are we really seeing the Black community or Black men sustaining themselves against this unrelenting attack on our Black maleness,” asked renown scholar, author and activist Professor Horne. He also reflected on the historical struggles of Black males, alluding to the notion that Black men must unite and be a stronghold in urban communities. “Even during slavery and times of Jim Crow laws, we found some way to protect our dignity.”

Horne maintained that the digital media age separates the Black family unit. “We have to get back teaching our young to be women and men of character,” he said.

When asked how asked how Black males can become stronger as a unit, Pianky stated, “Wear your African in you, not just externally.” For more information on the KRST Unity Center of AfRaKan Spiritual Science and its programming, visit krstunitycenter.org.