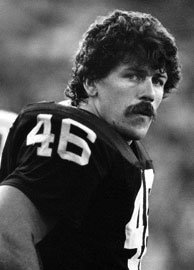 Todd Christensen, popular tight end with the Oakland and Los Angeles Raiders who helped the organization win Super Bowls in 1980 and 1983, died Wednesday morning during surgery at a Utah hospital after battling liver disease. He was 57.

Known for having some of best “hands” among receivers, Christensen during his 10-year career led the National Football League twice in receptions, setting a record primarily with quarterback Jim Plunkett with 349 catches from 1983-86.

“Todd was an excellent football player and was prolific in the passing game,” said former Raiders head coach Tom Flores. “He was a hybrid tight end, an H-back before it became a football term. He started out as a special teamer and was named our special teams captain right away while playing behind Raymond Chester and Dave Casper. He then helped us win Super Bowls. I remember Todd as always using big words and quoting famous authors and poets. He was comical at times, because no one knew what he was talking about. I hadn’t seen much of him lately, but miss the fun and great times we all shared as a Raider family.”

Christensen led the Raiders in receiving for four consecutive seasons from 1983-86; for his career, he caught 461 passes—most ever by a Raider tight end—for 5,872 yards and 41 touchdowns in the regular season. In eight post-season games, Christensen had 31 catches for 358 yards and one touchdown. In 1983, The Pennsylvania native set a then-franchise record with 92 catches for 1,247 yards and 12 touchdowns while helping lead the Los Angeles Raiders to a 38-9 victory against the Washington Redskins in Super Bowl XVIII.

In 1986, he broke his own team record with a league-leading 95 receptions for 1,153 yards and eight touchdowns.

Raiders general manager Reggie McKenzie, a teammate of Christensen with the Raiders from 1987-88, stated, “I am deeply saddened to hear the news about the passing of my former teammate Todd Christensen. Todd was a special player and an exemplary teammate and I cherished our time together as Raiders. The thoughts and prayers of the entire Raider family are with the Christensen family in this time of mourning.”

Selected originally by the Dallas Cowboys in the second round of the 1978 NFL draft, Christensen joined the Raiders in 1979 following a brief stint with the New York Giants. He had a distinguished career at Brigham Young University (BYU) and was inducted into the BYU Athletics Hall of Fame in 1992. He was also inducted into the Oregon Sports Hall of Fame in 2000. After football, Christensen was an NFL analyst for NBC from 1990-94, and worked for MountainWest Sports Network until it folded in 2012.