Saga of the Black P.O.W.: the Flip side of military service 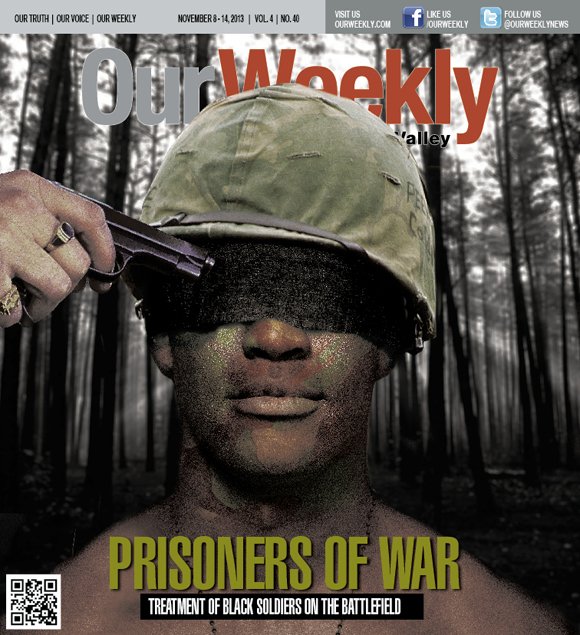 Once let the Black man get upon his person the brass letters U.S., let him get an eagle on his button, and a musket on his shoulder, and bullets in his pocket, and there is no power on earth or under the earth which can deny that he has earned the right of citizenship in the United States.

Black P.O.Ws captured by the North Koreans January 1951 / photos courtesy of the Library of Congress

African American aspirations for acceptance into the armed services are historically based partially on the notion that soldiering brings with it the rights and privileges of manhood, and in short order, entry into citizenship.

Gaining this right to bear arms brings up intriguing questions about the status of a prospective combatant in the eyes of the enemy faced on the field of battle. During the Civil War, which was largely fought over the question of slavery, the presence of Colored troops in the Union Army presented the Confederacy with a dilemma over the question of how to treat Black people when they were captured in battle. To grant them the traditional courtesy afforded detained combatants, meant validating their claims for freedom, a concept the South had taken up arms to prevent.

To address this, the Confederate hierarchy built upon the perception of the Negroes as wayward laborers, and labeled their striving for emancipation with an antiquated term called “servile insurrection.” African descendents bearing arms for the Union were thus eligible to be killed.

President Abraham Lincoln, in turn, made the pragmatic decision to “play tit for tat,” ergo, if a Union soldier of Color was executed, a Confederate counterpart would be killed; if a captured Black were subjected to bondage, a rebel prisoner would be committed to hard labor.

While this standoff improved the lot of the Union freemen, as expected, Southern attitudes (and the will to implement them) did not completely change over the course of the war. The act of acknowledging Black prisoners of war was too dramatic a concept for the South to grasp.

In this and subsequent conflicts that have transpired over the years, the image of the fighting man of color has proven to be an elastic concept, changing over time given the political climate, the nature of the conflict, and the identity of the opponent he faces.

Setting the stage for intolerance

Although Black soldiers participated in the “Great War,” or World War I, no record of P.O.W.s of color exists. At the close of hostilities however, the victorious French decided to occupy the Rhineland, the politically sensitive region bordering France and Western Germany, with Senegalese Tirailleurs, or colonial infantry recruited from West Africa. This exacerbated racial tensions in that area, the rest of Germany, and possibly set the stage for the atrocities that transpired in the next war.

Illegal killing: World War II and the Battle of the Bulge

The successful World War II landing of Allied Forces on France’s Normandy beaches in June of 1944 put the West in the driver’s seat, because the Axis Powers back peddled in the wake of the invaders’ sweep across Western Europe.