She said she heard him talking to Zimmerman 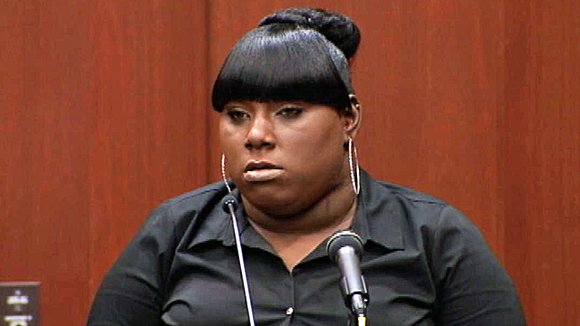 SANFORD, Fla. — Taking the stand on the third day of the George Zimmerman trial, a friend of Trayvon Martin testified about the final moments of the teenager’s life, saying that Martin told her someone was following him.

“A man was watching him,” said 19-year-old Rachel Jeantel, who was on the phone with Martin just before he was fatally shot. “He said the man kept watching him. He kept complaining that a man was just watching him.”

That man, prosecutors say, was Zimmerman, a neighborhood watch coordinator charged with second-degree murder for killing 17-year-old Martin in Sanford, Fla., on Feb. 26, 2012. He told police he was keeping track of the teenager because there had been a rash of crime in the area. A confrontation ensued, and Zimmerman said he was forced to kill Martin in self-defense.

Jeantel testified that Martin tried to lose Zimmerman as he neared the home of his father’s girlfriend.

“And then he said ‘That N-word is still following me now,’” Jeantel said.

“I asked him how the man looked like. He just told me the man looked ‘creepy.’ ‘Creepy, White’—excuse my language—’cracker. Creepy (expletive) cracker,’” Jeantel said.

She said she heard Martin talking to Zimmerman in the background of the call.

“He said, ‘Why are you following me for?’ And I heard a hard-breathing man say, ‘What you doing around here?’” she said.

Jeantel also said she heard a bump, from Martin’s headset hitting something, and “wet grass sounds.”

“I start hearing a little bit of Trayvon saying, ‘Get off, get off!’” she said. She told the prosecutor that the screams heard on the 911 call made by a neighbor belonged to Martin.

Earlier in the afternoon, jurors heard five other non-emergency calls Zimmerman made reporting suspicious people in his neighborhood. The defense wanted the calls to be thrown out, questioning their relevance, but the judge ruled they would be allowed in evidence.

Prosecutors had argued that the calls show Zimmerman’s state of mind the night he shot Martin.

An eyewitness also testified Wednesday that she heard what sounded “like a boy” cry for help during the altercation that ended in Martin’s death.

Jayne Surdyka, Zimmerman’s former neighbor, said she heard screams and opened her window to look out into the courtyard.

Defense attorney Don West challenged Surdyka about what she heard that night, saying it is possible for a teenager to have a deeper voice, and for a man to have a higher-pitched voice.

“It sounded more like a boy to me,” Surdyka said.

Several times Wednesday, Surdyka said she saw two men struggling on the ground, one on top of the other, but she couldn’t discern who was on top, because it was dark and rainy that night.

Prosecutor Bernie De La Rionda played for the jury the 911 call Surdyka made the night of the shooting. On the recording, Surdyka is heard crying and becoming hysterical. The 911 operator stayed on the phone with her to calm her down.

Prosecutors also called Jeannee Manalo, another eyewitness, to the stand Wednesday. Manalo testified that from her point of view inside her townhome, she could see two men struggling on the ground. She said she believed Zimmerman was on top of Martin during the altercation, and she could see his hands moving.