Studio to four bedrooms for seniors 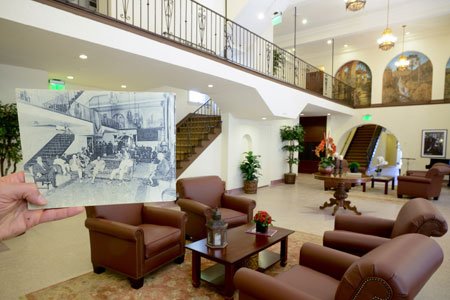 The famous Dunbar Hotel at 42nd Street and Central Avenue reopened Wednesday, aiming to recapture the grandeur of 70 years ago when it was a destination point for Black Los Angeles. The old hotel, which was the only first-class facility in town that accepted African Americans, has undergone a $30-milllion renovation to emerge as Dunbar Village, an 83-unit mixed-use development for seniors and low-income residents. Rent will range from $437 to $875 per month.

“Central Avenue and the Dunbar Hotel have long been an important part of our Los Angeles history,” said outgoing Councilwoman Jan Perry (9th District). “It is wonderful to see the avenue come alive again and know that this historic landmark has been restored.” Each apartment has new carpet, vinyl flooring and kitchens with modern appliances. The apartments range in size from studios to four-bedroom units; the Dunbar is mostly dedicated to seniors, while the adjacent Somerville complexes will be reserved for families and Section 8 housing.

The Dunbar underwent refurbishment in the 1980s, but that effort was not extensive as the neighborhood began to shift from a predominantly Black working-class area to today’s majority Latino community. Gangs, drug trafficking, the 1992 Los Angeles Riots and decades of economic neglect marked the blighted area as one of the city’s most unsafe and underserved regions. The Dunbar joins a list of new developments along Central Avenue that have been restored to revitalize what was once the original community for the city’s first Black citizens.

The Dunbar was built in 1928 and was the site of the first West Coast convention of the National Association for the Advancement of Colored People. Along the way, Jazz greats such as Duke Ellington, Lionel Hampton, Billie Holiday, Count Basie, Lena Horne, Louis Armstrong and Cab Calloway performed there each month. Other famous names in Black history who stayed at the hotel include Paul Robeson, Thurgood Marshall, W.E.B. Du Bois and H. Claude Hudson.

Renovations began in 2011 through a collaboration of public, private and government agencies, including: Thomas Safran Associates, Union Bank, the Coalition for Responsible Community Development, the Los Angeles Housing Department and the Community Redevelopment Agency of Los Angeles.