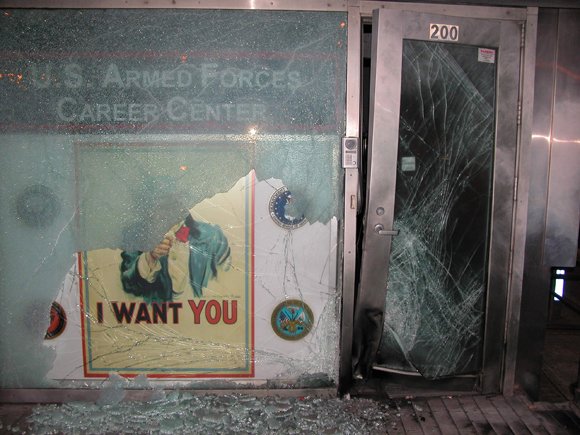 The bureau said Tuesday it released a “never-before-seen video of the suspect(s) and a picture of the explosive device.”

The grainy, seven-minute-long video shows a bird’s-eye view of the explosive device and a suspect riding a blue bicycle around New York City between 3 a.m. and 4 a.m.

According to the bureau, the suspect may be linked to similar unsolved incidents in New York — one in October 2007 and one in May 2005.

In the 2007 incident, a bomb was detonated near the Mexican Consulate. At that time, the authorities said the explosive device was similar to the ones used in the 2005 blast at the British Consulate. In both cases, authorities were looking for a person seen riding a bike in the area between 3 a.m. and 4 a.m.

Hoping for new leads, the FBI is using billboards and other outlets in a media blitz to encourage the public to take a close look at the newly released video. It also is advertising a $65,000 reward.

The billboards will be seen in Times Square and much of New England, including Rhode Island, Massachusetts, New York, New Jersey, Connecticut and Pennsylvania. A hash tag for the investigation involving the three unsolved incidents will be posted on Twitter as #bikebomber.

“Someone, somewhere knows something about a bomber who’s still on the run,” said George Venizelos, the FBI’s assistant director in charge in New York.

Law enforcement is offering a reward of up to $65,000 for information leading to the identification, arrest and conviction of the person(s) responsible for the 2008 bombing of the United States Armed Forces recruiting station in Times Square in New York City.

According to the bureau, the explosive device was built using an ammunition can, something more commonly found on the battlefields in Iraq and Afghanistan than on the sidewalks of Times Square. The can was filled halfway with black powder and detonated using a time fuse. Although no injuries were reported, the device could have caused significant harm if people had been close to the blast, authorities said.

A federal law enforcement source told CNN that bomb technicians say the Times Square bomb was stronger than the device detonated during the Boston Marathon in terms of destructive capability. But unlike the bombs used in Boston, it contained no shrapnel.

Five years ago, police released a photo of a suspect, an image extracted from surveillance video. It shows a person riding a bicycle away from the scene shortly after the explosion. Police also distributed a second photo showing a blue Ross bicycle that was found in a garbage unit nearby.

New York Police Commissioner Ray Kelly said in 2008 that there is a “possibility” the three incidents are connected.

“The times are very similar,” he said. “All three incidents took place with an individual on a bike, leaving a bomb. So, that’s a possibility. We can’t say with certainty that that’s the case, but that’s one of our investigative premises.”