Getting into a Playboy Jazz Festival mood in Baldwin Hills 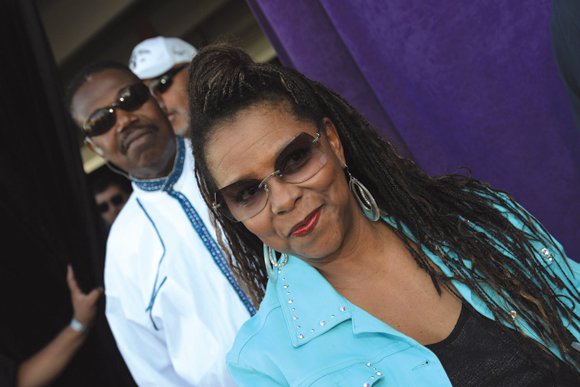 It was definitely hot fun, music-wise and weather-wise, at this year’s Playboy Jazz Festival’s free community concert at the Baldwin Hills Crenshaw Plaza on Sunday.

Headliners Patrice Rushen and Ndugu Chancler, and newcomers the Harmony Project Orchestra, kicked off the pre-event of the 35th annual festival which will happen at the Hollywood Bowl on Father’s Day weekend.

For the second straight year, the entertainment promenade of Baldwin Hills Crenshaw Plaza, now a mecca for free musical events, hosted the concert. “All the community concerts are part of Playboy’s outreach to bring Jazz to the community and make it more accessible to everybody,” according to publicist Nina Gordon.

The concert gave Baldwin Hills Crenshaw Plaza patrons the chance to park, shop and enjoy a little Jazz along their way. KJLH’s queen of talk, Tammi Mack, hosted the event.

The VIP section of the first few rows was dominated by proud parents and grandparents of members of the opening act, The Harmony Project Orchestra (showcasing the talents of the grandchildren of well-known jazz drummer Donald Dean, Darryn and Jamael). This youthful 18-piece orchestra, founded in 2002 and composed of multiethnic inner-city youth under the direction of former middle school teacher-artist Amos Delone, offered its eclectic musical take on pieces ranging from Herbie Hancock’s “Chameleon” and Horace Silver’s “Song for My Father” to Sister Sledge’s “We Are Family.”

But it was Rushen and Ndugu, who’ve known each other since they grew up in Watts and attended Locke High School, who brought the party on. Dancing onto the stage, Ndugu greeted the thousands there with “Good evening, L.A. It’s party time!”

And it was. Rushen’s sophisticated funk instrumental “Number One” got the heads boppin’ and the fingers poppin’. Then, knowing the crowd was clamoring for Rushen’s vocal stylings, Ndugu got Rushen to jam on “You Remind Me” and “Haven’t You Heard.” Ably supported by Paul Jackson Jr. on guitar and Reggie Hamilton on bass, Ms. Baby Fingers mixed her old-school hits with some of the drummer-percussionist’s new tunes, some serious Thelonious Monk Jazz and a lowdown Blues number. She alternated between her piano-synthesizer and singing, while he played drums, percussion and did backup singing.

There was even a little comedy thrown in for good measure, when Rushen put on some dark shades and Ndugu, a sideways cap, for a funny audience participation rap number.

Of course, though Rushen’s concert-ending “Forget Me Nots” was expected, what became a happy surprise was when she and Ndugu launched into dueling timbales at the song’s end, with septuagenarians in audience rocking along with 16-year-olds.

Since Bill Cosby “retired” from his much-loved emcee duties last year, this year’s festival will be hosted by comedian and Cosby admirer George Lopez.