The church: surviving the recession

It has taken a beating financially in the African American community, but a strong legacy remains 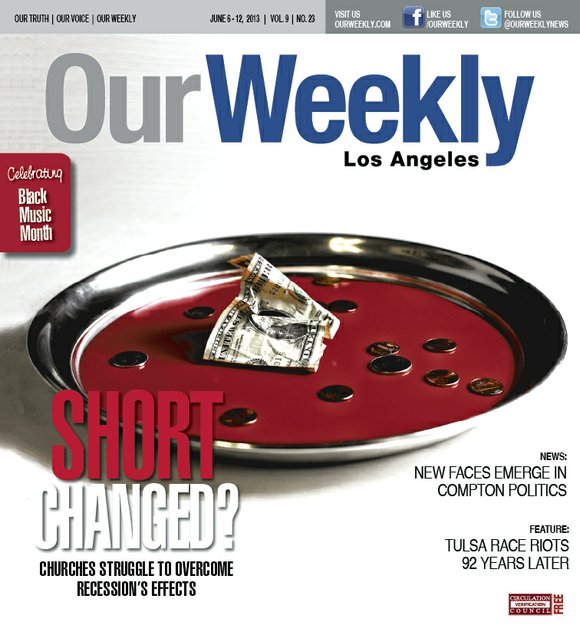 When it comes to crises, the African American community, like other communities, can usually count on assistance from the Red Cross, local government agencies and the church. But with the Great Recession forcing some churches to shutter their doors, is that lifeline in jeopardy?

The U.S. National Bureau of Economic Research (the official arbiter of U.S. recessions) says that the recession began in December 2007 and ended in June 2009. But according to Pastor Walter L. Smith III of Pure In Heart International Ministries Inc., poor and economically disadvantaged areas suffered before the recession’s height in 2008, and will suffer the impacts years after.

“The state of the economy has an even worse impact on the church, which is constantly juggling growing needs and limited resources,” Smith said.

Smith is based in Hollywood and serves as a church and ministry consultant throughout the nation, consulting with Bishop T. D. Jakes, Clarence McClendon, Bishop Carlos l. Malone Sr. and others, tackling topics such as leadership development, community and economic issues pertaining to church business and ministry programs.

“Church leaders have to approach issues on four fronts,” Smith said. “They have to look at the recession politically—it diminishes the voice of the poor in the ears of local politicians. In a recession politicians tend to follow the money to find support for their issues and causes. This has a tremendous impact on the Black church.

“Socially, the church has a great burden of responsibility during tough times,” Smith added. “We have to reach out more. “Economically, 99 percent of the church budget depends on the congregation’s freewill giving,” Smith said. “The disproportionate Black unemployment rate is an increased economic burden to the church.”

“Spiritually, though, churches are supposed to be operating in God’s economy,” Smith added, explaining the faith that God will supply all need. “During tough times, at any church in general, we should focus on the principles of stewardship management and God’s economy.”

Smith believes that with stewardship and faith, the Black church will grow. But it’s not so much the numbers in the buildings, he insists, but the numbers of the faithful. The maintenance costs of mega-churches are burdensome.

“Every church has the same mandate, Matthew 28, the Great Commission [‘Go therefore and make disciples of all the nations, baptizing them in the name of the Father and of the Son and of the Holy Spirit’],” Smith said. “And the great commandment, ‘love one another’.”

Smith says that the church has to become a missionary force of reconciliation by leaving the four walls of the church, building relationships with other congregations and joining together across denominations.

“In your physical body, if a cell isolates itself, it becomes cancerous,” Smith said.

“The greatest revival we will see will be from things that happen in communities where churches are. We have to get out of the buildings to the people, not get more people in the buildings.”

Some churches have reached out to provide schools, youth centers, mixed housing complexes, community development centers, credit unions and social enterprise organizations. These are important to the Black community, Smith says, because it suffers so much from not circulating its own money.

When the community improves, witnessing the love of Christianity firsthand in their neighborhood, the church has impact.

One such church is Crenshaw Christian Center, which maintains a K-12 school and has offered a number of programs to the community, including at one time a food program.

“Crenshaw Christian Center has realized a decrease in revenue (tithes and offerings) over the past five years,” says Angela M. Evans, CEO. “We believe that it is due in large part to the economy. Upon surveying our members we learned that many are out of work and, therefore, have little or nothing to give. However, praise God, all is well and every need is still met.”

During the aftermath of Hurricane Katrina many African American church leaders publicly criticized government agencies and the Red Cross for not responding fast enough to the needs of those displaced by Katrina and the bureaucratic red tape that slowed reaction time while many were dying of neglect. After Katrina, examples of grassroots efforts of housing, collection of clothing and other necessities was instantaneous from Black churches across the nation, according to an Aug. 10, 2010, statement by NBC news.

“Part of why there are dwindling numbers new of converts is because there are so many different approaches for doing church,” Smith said. “And there’s a hostility towards the Christian faith community. People don’t want to be profiled saying you’re a Christian. The world is growing darker.”

A 2011 study by the well-known Barna Group, a research organization focusing on the intersection of faith and culture, indicates that church attendance began flagging long before the recession. For example, weekly church attendance by Whites declined 9 percent from 1991 to 2011, dropping from 48 percent to 39 percent. Among Hispanics the decline was more pronounced, falling 21 percent, from 54 percent to 33 percent.

The most stable group of the three racial/ethnic segments has been the Blacks,” said part 4 of the report, called “State of the Church Series, 2011.” While the report did not give a percentage drop among Blacks, it did say that “in 1991, 38 percent of Black adults volunteered at a church during the course of a typical week. That figure had fallen to 30 percent by 2011.”

USC’s Center for Religion and Civic Culture states that in 2000, 40 percent of Los Angeles County’s population was Roman Catholic, with the second largest group being the Jewish religion with 5.9 percent; followed by the Southern Baptist Convention with 1.2 percent followers; and the Mormon and Muslim religions with one percent each. However, numbers fell in most of the religion groups by the 2010 count, including Catholics, whose numbers have dropped to 36 percent of the County’s population and the Baptist Convention, which dropped to 1.02 percent.

Zion Hill Baptist Church of Los Angeles holds food pantries on the first and third Tuesdays each month, with more than 200 people visiting each day.

“We give them groceries and fresh produce and have a clothes closet that operates at the same time, the Rev. Seth Pickens said. “Everything’s free and church members donate clothes, and people from the community donate. Us just being there, people know how times are. People just know the church is there as kind of a command post in the community.”

Pickens has pastored his church since 2009, but said Zion Hill has actually grown since then and the amount of money tithed to the church has increased. The congregation recently paid to paint the entire exterior of their building—a job costing nearly $70,000.

“Many assume ‘we can’t do this, we can’t do that in the economy,’ but we are there for a spiritual purpose, we are not limited by the economy problems that we encounter,” Pickens said. “Things that hold us back, we might blame the economy as an excuse, but really it’s our own creativity, hard work and faith that allow us to get things done or not.”

Father Allan Roberts, pastor of St. Bernadette’s Catholic Church, agreed that the faithful have been surviving the recession in good fashion. The church has a free, weekday lunch program and a biweekly grocery program for people who qualify.

“There’s still a lot of generosity in the area,” Roberts said. “Even though our bills are getting higher and our parish is getting smaller. We’re in Baldwin Hills and there are 700 to 750 families registered on the books. Some are elderly and confined. Not a lot of young families are able to live here.”

When Roberts arrived at the parish in 2003, a new roof was needed and he was able to raise the money in only a month.

“There’s generosity out there,” he said, adding that although the church is able to pay the small salaries of staff, it’s the insurance costs that hit hardest.

“Sometimes we have to take up special collections to address the debt with recession and increased costs, it’s harder to maintain for liability, fire and theft.”

Unfortunately, the recession and dwindling congregation numbers played a hand in the closing of St. Bernadette’s Parish elementary school two years ago.

“Different people have requested to lease the buildings.” Roberts said. “Some of the rooms have been renovated into meeting rooms. “Hopefully, we’ll be able to reopen some day.”

The Rev. Dr. Cedric Bridgeforth, North District superintendent for the Cal-Pac Annual Conference of the United Methodist Church, agrees that a church must evolve with its community to remain relevant.

“Most of the church closures we have experienced have not been in direct response or as reaction to the most recent economic downturn,” he said.

“The closures seen in Greater Los Angeles area, among United Methodist congregations, were in response to decades of decline and a loss or relevance within a given community. Of course, economics is a part of that,” Bridgeforth said. “But when a church fails to reach the neighborhood where it is located, that church really could be located elsewhere and free-up space and resources for other ministries to take place.”

“When there is a Hispanic ministry, it is usually of another faith expression and is a tenant of the church as opposed to being an invested participant and owner of the building or capital resources,” Bridgeforth said.

“That reality has created a class or caste system among congregations—those who own and those who cannot own a building,” he added. “Los Angeles experienced this phenomenon a few decades ago when White Flight was the order of the day, except then, the White churches would not or did not rent to Black congregations. But when Blacks began to join and move in, the White people moved away and left the buildings to be bought or inhabited by Black congregations.

“Those Black congregations, many beneficiaries of White Flight churches, are the ones holding space and losing relevance among the new populace,” Bridgeforth said. “For me, that is also related to economics in that the churches are surviving off rent exchanged between faith communities—one needing the other to survive.”

“The churches that were perceived to be healthy churches—those living off rental income from other nonprofits, charter schools, and residual income from investments, are the ones that have been hit hardest because of a reliance on stock market realities and subsidies that were based on government funding sources.”

“The smaller and more cash-based congregations operate on a principle that says, ‘If we do not have it in hand or in the bank, we cannot spend it.’ That means those churches have weathered the economic storm with relative ease because their model for financing ministry has not changed,” Bridgeforth said. “They have seen drops in revenue but they have not had to adjust their way of doing business and that seems healthier to me.”

The superintendent still believes that whatever the financial circumstances, churches are still a viable lifeline in times of crisis.

“We see the same outpouring of support for food and clothing assistance in all of the food pantry and clothing assistance programs around the region,” Bridgeforth said. He believes that requests have been on the rise and haven’t slowed with the purported “end” of the recession. Churches in his district are making pleas on a weekly basis for congregants to bring non-perishable food items for distributions.

“What is also on the rise is the need for toiletry items. In a family where food is an issue, basic sanitary products and hygiene items are also an issue. So, churches are going beyond the basic canned and boxed food items to providing toothpaste, deodorant and other items to help families in need.

“No matter what causes disaster in this country and around the world, the people of faith rise to the challenge,” Bridgeforth said. “Once their hearts are warmed and touched, the finances appear and are available to assist.”