Riot breaks out after U.S. Open of Surfing in Huntington Beach 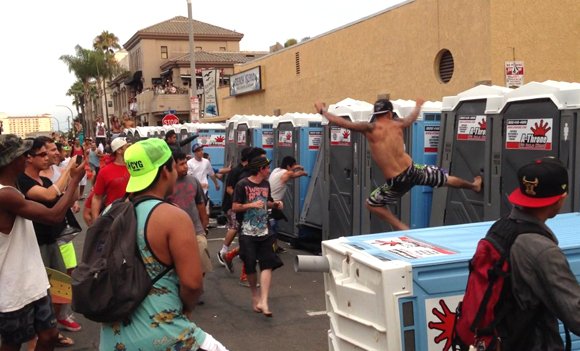 HUNTINGTON BEACH, Calif. — First, police say, came a fight in a crowd at the end of a multi-day surfing and skateboarding competition in Southern California’s Huntington Beach on Sunday evening.

Then came a riot, with scores of people rampaging down palm tree-lined streets, damaging city vehicles and street signs, throwing more punches and overturning portable toilets as many more looked on.

By the time helmeted police broke up the disturbance hours later — firing pepper-spray pellets in the process — at least eight people had been arrested on suspicion of failing to disperse, the Huntington Beach Police Department said.

The rampage came as people left the U.S. Open of Surfing, a nine-day event that wrapped up Sunday afternoon. No injuries were reported.

“It started with like a fight, and then it just broke out,” an unidentified woman told CNN affiliate KTLA. “They were tipping Porta Potties. Then the cops started to move in, and they were throwing tear gas at everyone.

“Everyone was like plugging their nose and coughing and dodging into stores. Everyone was just running down Main Street.”

In a cell phone video obtained by CNN, men topple portable toilets as others jump and cheer, and still others look on and record video. Another clip shows two people exchanging punches while surrounded by scores of onlookers.

The competition’s organizers are “extremely disappointed and saddened by the disturbance,” a message on the U.S. Open of Surfing’s Facebook page said.

Huntington Beach police said the crowd was dispersed by 9 p.m. PT. They said they’d like anyone with pictures or video of the rampage to call them.

CNN’s Stephanie Elam and AnneClaire Stapleton contributed to this report. 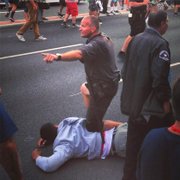