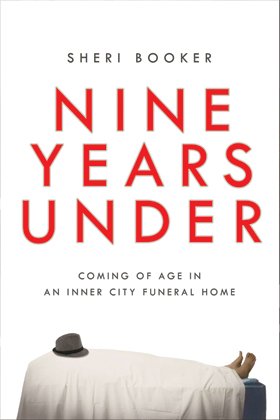 Sitting around all summer would’ve been so wrong.

And that’s why you found a job that year between classes. No more parental handouts, no more wearing clothes your mom bought you, no more borrowing the car. With your own job, you had your own money to buy your own things, maybe help out at home, or sock some away.

Finding work, yep, was the right thing to do. For then-15-year-old Sheri Booker, the savings from her very unique job went towards college. In her new memoir, “Nine Years Under,” she explains why it was a job she’d been dying to get.

She didn’t realize that “hospice care was the beginning of the end,” so when her great-great-Aunt Mary died of cancer, Booker was surprised—and lost. Growing up in Northeast Baltimore, she had few heroes. Aunt Mary was one of them, but Booker didn’t feel like she had “permission to mourn.”

She didn’t feel like going to church, either, but her parents insisted. It was there that Booker ran into one of the church’s deacons, Mr. Albert Wylie, who also owned one of Baltimore’s many African American funeral homes.

He didn’t ask her how she was handling her loss. Instead, he offered her a job.

For four hours a night, a few nights a week, Booker answered the phones and the door at Albert P. Wylie Funeral Home. She thought it might be weird, but it wasn’t—it was interesting, and she did her work well. Soon, she was assisting with viewings and she learned her first lesson: never let clients see you cry.

But that was difficult. Witnessing the grief of families who lost someone elderly was hard enough. Wylie Funeral Home also did a brisk business with the city’s poor, the gang-bangers and drug addicts.

Still, it was a job Booker enjoyed and soon, she started doing errands for Wylie. Then she did paperwork, filing, and book work. Eventually, she dressed bodies and assisted as much as she legally could. She became an honorary member of the Wylie family for nine happy years, but in work—as in life—all good things must come to an end.

With knowledge, a willingness to disclose, and a good amount of humor, author Sheri Booker not only shares the story of her tenure as a funeral home assistant and the duties she assumed, she also gives readers a sense of what goes on behind closed doors there. She weaves this information—some of which is graphic—in with observations on mourners, neighbors, and the industry as a whole. I loved that Booker finds a certain amount of comedy in death and preparing for its rituals, and her musings on funerals are priceless.

This is a wonderful, wonderful book that sounds squirmy, yet is anything but. So grab “Nine Years Under”—because if you think you’ll like it, you’re dead right.