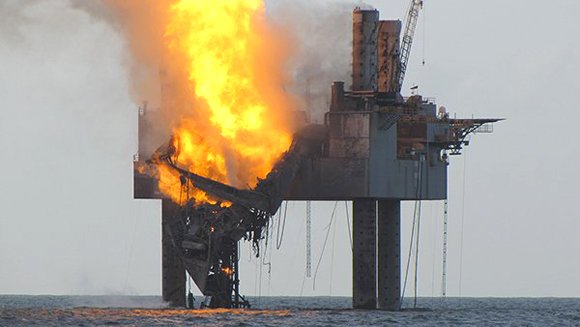 Rig on fire in Gulf of Mexico Abatement efforts underway on Wednesday, July 24, 2013, near Hercules 265 Rig where fire has caused collapse of the drill floor and derrick following an explosion Tuesday night. U.S. Coast Guard

GULF OF MEXICO — The fire that severely damaged a drilling rig in the Gulf of Mexico subsided Thursday as sand and mud stopped up a natural gas well that blew out earlier this week, federal regulators said.

The blaze erupted Tuesday aboard the rig, located about about 60 miles off Grand Isle, Louisiana, in 154 feet of water. What remained Thursday was a small flame “fueled by residual gas at the top of the well,” the federal Bureau of Safety and Environmental Enforcement reported.

The accident happened when workers aboard the Hercules 265 hit an unexpected pocket of gas while preparing the well for production. Forty-four workers were evacuated from the rig without injury, officials said.

While the rig remained standing, parts of the structure above water had collapsed as a result of the intense heat, officials said.

The BSEE said Wednesday that the only contamination so far had been a light sheen on the ocean that appeared to dissipate quickly. No oil was being released, the BSEE said. The rig’s owner, Hercules Offshore, said Wednesday that it had brought in an environmental expert to keep an eye on wind and ocean conditions to track any possible contamination.

It was not immediately clear what steps would now be taken to secure the well. Hercules Offshore had said Wednesday it was preparing to bring in another of its drilling rigs to prepare a relief well, if necessary.

Tuesday’s blowout was the second this month in the Gulf, where the worst oil spill in U.S. history occurred in 2010. Workers on a production platform lost control of an aging gas well while trying to plug it on July 8, resulting in a leak of about 250 gallons of liquid natural gas. There were no injuries.

Most of the work being done in the shallow water off Louisiana now involves attempts to draw the remaining gas out of old wells or to shut down ones that are no longer profitable, said Eric Smith, associate director of the Tulane Energy Institute in New Orleans. In this case, the rig was set up next to an existing gas platform, drilling a “sidetrack” well to reach the remaining gas after an existing well became blocked, Smith said.

In the aftermath of the blowout, the well operator is likely to close it off and abandon the site, he said.

Unlike the catastrophic Deepwater Horizon blowout in 2010, which released millions of barrels of crude oil and gas at high pressures, this week’s accident “is a much smaller blip on the horizon,” he said.

But the recent incidents are a reminder that offshore work is “inherently risky” and that blowouts “aren’t that infrequent,” said Michael Bromwich, the former chief of the BSEE and its predecessor agency, the Bureau of Ocean Energy, Management Regulation and Enforcement.