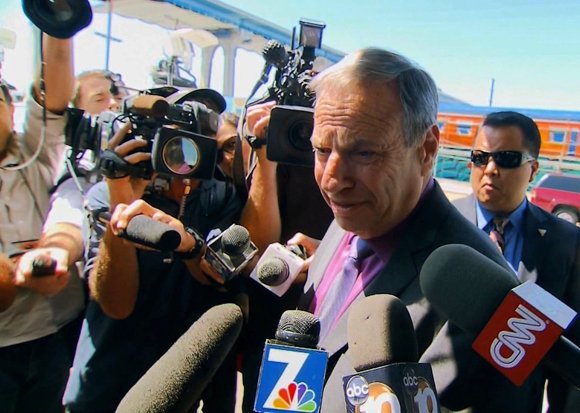 His chief of staff has resigned, his party has called for him to step down — even his fiancee has left his side.

Yet San Diego Mayor Bob Filner is standing firm as more women come forward with allegations of sexual harassment and more colleagues call for his resignation. He has called a news conference at 3 p.m. to “make a statement,” his office announced Friday, offering no further details.

Seven women have publicly accused Filner of unwanted groping, kissing and other inappropriate contact. Many of the accusations allegedly took place during his five terms in Congress, before he was elected mayor last year.

Filner, 70, admitted to “inappropriate” behavior this month, saying he has “failed to fully respect the women who work for me and with me, and that at times I have intimidated them.”

Yet, he has said he will not step down from an office he was elected to barely eight months ago.

“It’s very important that I think we continue with my priorities, that’s what I was elected to do,” Filner said last week. “That’s why I’m not resigning.”

That was before he faced a lawsuit from his former spokeswoman, filed Monday. And it was also before his own Democratic Party in San Diego overwhelmingly voted Thursday in favor of him vacating his office.

Here’s a breakdown of who’s accused the mayor of what, and the impact of those allegations: