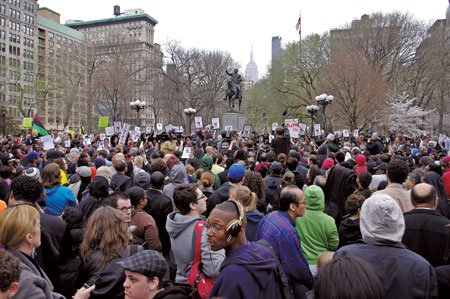 A large 'Justice for Trayvon' rally in Manhattan brings out a mixed crowd.

Jay Z and Beyonce joined Trayvon Martin’s mother Sybrina Fulton and the Rev. Al Sharpton in the heat at a New York rally. Heeding a call by Sharpton’s National Action Network, more than 100 “Justice for Tryvon” rallies were held outside federal buildings in cities around the country on Saturday. The purpose was to urge authorities to change self-defense laws and press for federal civil rights charges against a former neighborhood watch leader found not guilty in the shooting death of the unarmed Black teenager.

Locally, a rally turned into a march. Hundreds of protesters left the federal court building downtown and headed to the Mid-City area while another group headed to the Crenshaw district.

A coalition of civil right groups gathered at the state Capitol in Austin, Texas, to call for action from the government and show their support for Martin. But in Houston on Sunday, dueling groups came face to face, pitting pro-George Zimmerman and Stand Your Ground advocates against Justice for Trayvon marchers in the upscale River Oaks area of the city.

In Louisville, Ky., an organization promoting the development of positive role models in the community, held a town hall meeting to discuss the shooting death to ensure that a similar situation does not occur there, reported the Louisville Courier-Journal.

“We want to make sure that our young people understand that sometimes, if someone is following you, someone is profiling you, instead of engaging into that conflict, which could ultimately be deadly, to avoid it at all costs, to stop, to think and to act,” said Frank Porter, chairman of MAN UP, a local chapter of Service for Peace, a national network of volunteers advocating positive community development.

According to the Los Angeles Times, “in Washington, Joyce G. Davis, who is Black, was among about 500 people who gathered outside the federal courthouse for a rally. The protests are ‘for the whole country to know that racism still exists,’ Davis said. ‘We have to continue to fight for equality and justice.’”

Hundreds rallied in Hartford, Conn., and there as in most rallies the crowds were racially mixed.

On Wednesday, Tracy Martin spoke to congressional members on Capitol Hill in Washington about the difficulties and challenges facing Blacks in 21st century America.

Much of the nation has remained in an uproar since Zimmerman, who fatally shot the 17-year-old Martin on Feb. 26, 2012, in Sanford, Fla., was acquitted of second-degree murder and manslaughter on July 13.

Internationally, a high official in Iran weighed in on the Martin case, according to the website Legal Insurrection.

“‘The acquittal of the murderer of the teenage African American once again clearly demonstrated the unwritten, but systematic racial discrimination against racial, religious and ethnic minorities in the U.S. society,’ Iranian Foreign Ministry spokesman Seyed Abbas Araqchi said.

“He noted that the court ruling has also seriously put under question the fairness of the judicial process in the United States.

“‘Several months since a probe was launched (into the murder), the public opinion in the U.S. and across the world expect transparency, an accurate and fair judicial investigation into the case, with due regard to human rights principles for American citizens and a ban on discrimination against minorities in the country,’ Araqchi added.”