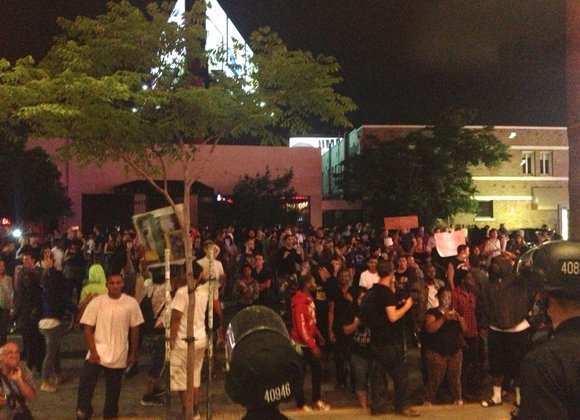 LOS ANGELES, Calif. — A Los Angeles man and nine teenagers were charged in connection with protests in Los Angeles and Hollywood earlier this month, the District Attorney’s Office announced today.

Shareef Abdullah, 28, is accused of approaching a CBS news crew, threatening to shoot a TV cameraman if he didn’t give him the camera and fleeing with the equipment at a protest July 13 in Los Angeles, according to the District Attorney’s Office.

He also allegedly tried to steal a $7,000 camera belonging to Telemundo before being chased away, then returning to grab the camera before a TV cameraman chased him and managed to get the camera back the same day, according to the District Attorney’s Office.

The crews were covering a demonstration over the acquittal of George Zimmerman in the killing of Florida teenager Trayvon Martin.

Abdullah — who was arrested July 16 by Los Angeles police — is due back in Los Angeles Superior Court July 30 for a hearing to determine if there is enough evidence to require him to stand trial on robbery, criminal threats and attempted grand theft.

In a separate case, nine other teens who were allegedly part of a so-called “flash mob” that robbed pedestrians of cell phones, a wallet and a skateboard July 17 at Hollywood Boulevard and Highland Avenue have denied Juvenile Court petitions charging them with robbery.

Three girls and two boys who are all 16 and four 15-year-old boys are due back in court next month. Police said last week the group in Hollywood was likely taking advantage of the department’s focus on the Trayvon Martin protests.

“What we’re thinking is these youngsters took advantage of our redeployment of officers down to the Crenshaw district last night, and decided this would be a good night to come up to Hollywood and act a little crazy,” Los Angeles Police Department Cmdr. Andrew Smith said last week.