A medley of ethnic cooperation characterizes the performances 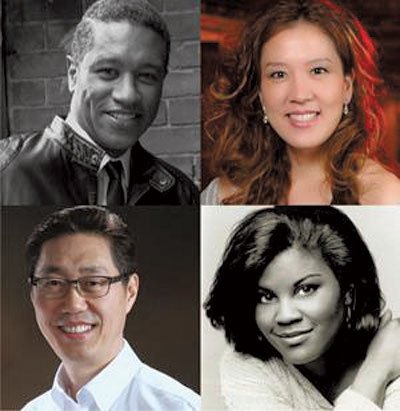 A national and local multi-ethnic lineup of Classical and Opera artists will perform at 3 p.m. Sunday, Aug. 18, to celebrate the 50th anniversary of Martin Luther King Jr.’s “I Have a Dream” speech at the 1963 March on Washington.

The Symphony of Brotherhood Concert will be held at Zipper Hall at the Colburn School, 200 S. Grand Ave., Los Angeles. Hosts for the concert will be Classical KUSC announcer Dennis Bartel and USC Thornton School of Music doctoral candidate Zanaida Robles, who also directs the USC Thornton University Chorus.

The concert will highlight King’s little-known appreciation of Classical music and Opera, as well as the historic footprint of the civil rights leader in Los Angeles. It will include the world premiere of a poem to honor King that was written and set to music by South Korean educator and composer Joo Poong Kim. Kim said he searched for an existing Korean poem that would be appropriate to honor the civil rights leader before deciding to write his own. Pianist Phoenix Park-Kim and soprano Jumi Kim will perform the piece.

The title of the concert comes from this line in King’s iconic speech: “With this faith, we will be able to transform the jangling discords of our nation into a symphony of brotherhood.”

The concert will include arias from several operas, including one that was sung in 1959 by Coretta Scott King; spirituals; instrumental music for piano, flute, violin and cello; poems by Langston Hughes, Kim So Wol and others set to music—all chosen to illustrate some facet of King’s life.

Several performers have links to the USC Thornton School of Music. Juliana Gondek received her bachelor’s and master’s degrees in vocal performance at USC, and worked as a professional violinist before going on to a vocal career that includes performances with more than 120 top symphony orchestras and opera companies throughout North America, Europe and Asia. She is a leading interpreter of baroque, Mozart, bel canto and contemporary repertoire, and has made more than 20 commercial recordings, as well as having starred at the Metropolitan Opera, San Francisco Opera, New York City Opera, Scottish Opera, Netherlands Opera, Zurich Opera and many other companies.

Anita Johnson, who has more than 20 years of experience as a performing artist and music educator, received her bachelor’s degree in voice performance from USC and a master’s degree from the University of Michigan. She is a graduate of the Metropolitan Opera Lindemann Young Artist Development Program, and has performed in productions at the Met, New York City Opera and at the White House in the ceremony honoring Stevie Wonder with the Library of Congress Gershwin Prize.

Bass-baritone Cedric Berry received both his bachelor’s and master’s degrees from USC Thornton, after first studying at Interlochen Arts Academy. A resident artist with the Los Angeles Opera, he has sung in “The Barber of Seville,” “La Boheme,” “Samson et Dalila,” “Faust,” “La Rondine” and “Billy Budd.” He has been the recipient of several vocal awards, including first place in the Metropolitan Opera Western Regional Competition.

Pianist Polli Chambers-Salazar received a doctorate in piano performance from USC Thornton, and has taught at USC Thornton, Pasadena City College, the College of the Canyons and El Camino College. She has performed across the United States and Canada, and received awards in many competitions, including the Simon-Fiset Competition, the New Orleans International Piano Competition and the Seattle Young Artists Festival.

Annelle Gregory, who won the gold medal at the 2012 NAACP ACT-SO competition and was a laureate of the 2013 national Sphinx Competition, will be attending USC Thornton in the fall to study violin with Glenn Dicterow, former concertmaster of the New York Philharmonic.

Concert co-host Dennis Bartel is Classical KUSC’s morning announcer who can be heard from 6 a.m. to 9 a.m. weekdays, and from 1 to 6 p.m. Sunday. A broadcaster with 30 years of experience, he served as an opera host earlier in his career in Washington, D.C. Co-host Zanaida Robles is pursuing a doctorate of musical arts degree in choral music at USC Thornton. She also is the artistic director of the San Gabriel Valley Choral Company and director of Discovery Camerata, an organization for emerging vocalists and composers.

The concert is being produced by MusicUNTOLD, which presents arts and education programs and is affiliated with the Long Beach Central Arts Association. Sponsors of the concert include The Colburn Foundation, Classical KUSC, Employee Community Fund of Boeing California, the Los Angeles Athletic Club and Long Beach Mercedes-Benz.