Since 1958, the U.S. has reversed position on student loans

Rather than support home-grown high-tech workers, the preference leans to imports 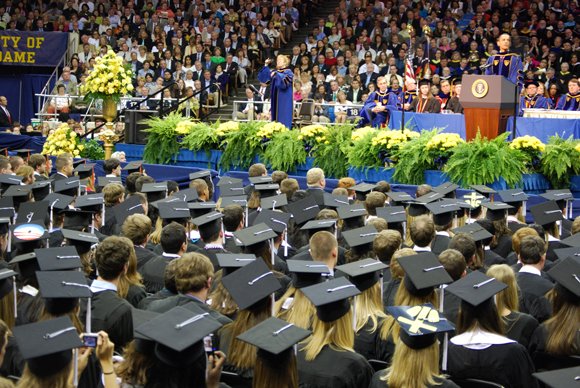 President Barack Obama speaks at the commencement ceremony for Notre Dame University in South Bend, Indiana on Sunday, May 17, 2009. His appearance at the university touched off a storm of controversy surrounding the debate on abortion. Shawna Shepherd/CNN

On Oct. 4, 1957, the Soviet Union shocked America with the successful launch of Sputnik I, the first man-made object launched into Earth orbit. The 20th century quickly became passé. The race was on for the 21st century and America realized the race would be won with technical skill and know-how. So, the response was quick. By September 1958, President Eisenhower and the 85th Congress, with the Senate almost evenly split between 49 Democrats and 47 Republicans voting 62-26, put in place the National Defense Student Loan program.

Concerned that America could not produce enough skilled people if college was left to the wealthy, the loan program was to make sure that talented but less well-off American children could have access to a college education to make sure we would have enough teachers to keep class sizes down, scientists and engineers to meet the technical challenges and skilled linguists for a global society.

The maximum loan a student could take out was $1,000 a year and $5,000 over a lifetime. That figure needs to be put in context in two ways. Adjusted for inflation, that would be $8,060 today, compared with the current program’s cap of $5,500 a year. But, to put $1,000 in the context of college tuition, in 1958 tuition to the Ivy League University of Pennsylvania was $1,050 a year for undergraduates.

The loans were backed by the U.S. Treasury, so the legislation fixed the payback at the cost of money to the U.S. government—3 percent. To put that 3 percent in context, in 1958, the prime rate that leading banks charged good corporate clients was 4 percent and home mortgage interest rates were running close to 5 percent. There was built-in loan forgiveness for students who entered the K-12 teaching corps. So, to summarize, in less than one year, a Republican president and a Democratic Congress put in place a program to expand college opportunity so that an American child could borrow and pay for tuition to any college in the United States, including the Ivy League, and borrow the money at a rate less than the prime rate for American corporations or home mortgage rates of the day.

Now, in 2013, the 21st century is here. What policymakers understood in 1958 would happen is upon us. We live in a global economy where the success of a nation is dependent on the ability to train a highly skilled work force. And what is the reaction? Well, the Senate passed an immigration reform bill that will increase the flow of highly skilled workers into the United States by estimates of 40,000 a year. And, Congress left town to celebrate American Independence, letting the interest rate on college student debt double to 6.8 percent at a time when the prime rate is 3.25 percent and mortgages are around 4.3 percent.

On Tuesday, the president met with the Congressional Black Caucus, which raised the regulatory changes the Department of Education made that resulted in denying college loan access to middle-income African American families by arbitrarily changing the way their creditworthiness was determined. African American families that had been receiving loans then were denied loans, throwing students out of school midway in their studies.

More than 15,000 of these families had students at historically Black colleges and universities—the schools that graduate almost one in three African Americans earning baccalaureates in science, technology, engineering or math; the very skills America lacks. So, does this mean the response from this president and this Congress is that facing a need to increase skilled workers, we will import them and “save” on having to do something to lift American children?

As a nation we are facing the same crossroads faced in 1958, but what a difference 55 years makes in American policy response. Rather than double down our investment on American children and give them every advantage to pull our nation forward to meet the challenges ahead, we would rather outsource the skill development and import the talent.

On Friday, July 5, right after Independence Day, the Labor Department reported that the unemployment rate for 18- to 19-year-olds—our current crop of high school graduates—was 22.6 percent. For those 20 to 24—including those who would have recently finished college or community college—the unemployment rate was 13.5 percent. For 18- to 19-year-olds, that is an improvement over the record level of 25.3 percent they had in December 2009, but it still is worse than any monthly unemployment rate in history before 2009, except for two months in the 1982-83 downturn, when it peaked at 22.8 percent. These numbers are not acceptable. Four years into a “recovery,” we cannot leave our young people with no jobs and turn our back on them in helping to make their investment in education affordable.

Young people are not fooled. The government stepped in to bail out Wall Street when it collapsed of its own folly. The Federal Reserve stepped in to hand money at virtually zero interest to keep banks afloat. So, clearly government is “not the problem” if you are a group that can pay your way to the table; government is “the answer.”

To economists, interest rates tell us the price of the future. It is called the discount rate, letting us know how much you would discount getting money in the future rather than today. When we set high interest rates on loans to students, we are saying that now is more important than their future. When we would rather give money to banks or corporations at lower rates, we are betting more of our future on them than on our children. Worse, as Sen. Elizabeth Warren (D-Mass.) points out, by charging our children higher rates, the government nets $51 billion above its cost of obtaining funds.

So, when we are more concerned about keeping the tax rates low for corporations that keep their money offshore and hide behind foreign tax-haven borders, than in creating policies to hire our own children, it says even more. And, when our response to a skills shortage is to import people rather than develop our children, we say even more. Two different times, two different policy reactions . . . says a lot about us.

William Spriggs serves as chief economist to the AFL-CIO and is a professor in, and former chair of the department of economics at Howard University. Spriggs is also former assistant secretary for the office of policy at the United States Department of Labor.