The image is one Tsarnaev himself posted online 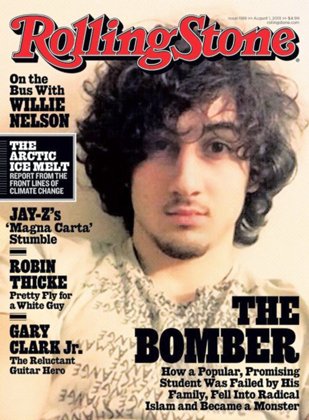 Rolling Stone puts Boston bombing suspect on cover, ignites firestorm Rolling Stone magazine's decision to put Dzhokhar Tsarnaev, the accused Boston Marathon bomber, on the cover of its latest issue has ignited a firestorm of outrage online.The cover picture is one that Tsarnaev himself posted online and has been published widely by other media outlets in the past. Rolling Stone

NEW YORK, N.Y. — Rolling Stone magazine’s decision to put Dzhokhar Tsarnaev, the accused Boston Marathon bomber, on the cover of its latest issue has ignited a firestorm of outrage online.

The cover picture is one that Tsarnaev himself posted online and has been published widely by other media outlets in the past.

But many took exception to its prominent play in Rolling Stone, where the space is more often than not reserved for rock stars and celebrities.

“Oh look, Rolling Stone magazine is glamourizing terrorism. Awesome,” Adrienne Graham commented on the magazine’s Facebook page. “I will NOT be buying this issue, or any future issues,”

Words such as “tasteless,” “sickening” and “disgusting” flew around social media.

The photo shows a scraggy-haired, goatee-d Tsarnaev staring straight at the camera.

The text read: “The Bomber. How a popular, promising student was failed by his family, fell into radical Islam and became a monster.”

The magazine says the article itself is a deeply-researched account of the suspect.

The issue hits newsstands on August 3.

But the magazine’s Facebook post of the cover image has received more than 4,700 comments by early Wednesday morning.

“What a slap in the face to the great city of Boston and the Marathon Bombing victims,” commented Lindsey Williamson.

The cover also brought out comments from the “Free Jahar” movement. (Dzohkhar is also spelled Jahar.)

“#BoycottRollingStone calling Djahar a monster and stirring the pot even more shame on you! Innocent until PROVEN guilty,” tweeted @Jahars_Tsarnaev.

CNN has reached out to Rolling Stone for comment, but has not received a response.

Authorities accuse brothers Tamerlan and Dzhokhar Tsarnaev of setting off a pair of bombs just seconds apart near the finish line of the packed Boston Marathon course on Boylston Street on April 15.

Three people were killed and more than 260 were injured.

Tamerlan Tsarnaev was killed four days later in a shootout with police.

Younger brother Dzhokhar was captured and charged with 30 federal counts stemming from the attack.

Last week, he pleaded not guilty to the charges.