“House of Cards” and “Arrested Development” could make history 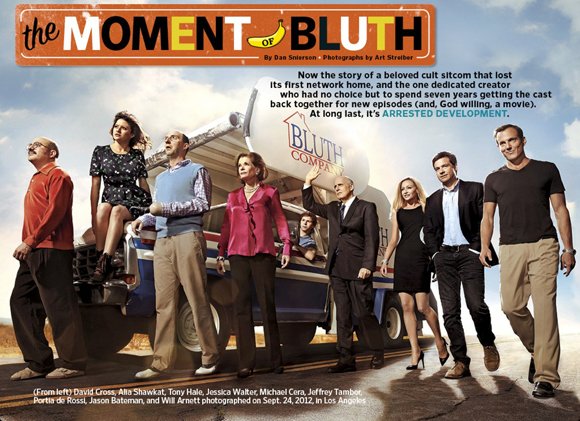 Netflix’ “House of Cards” and “Arrested Development” could make history Thursday when nominations are announced for the 65th annual Primetime Emmy Awards.

A series from a video streaming service has never received a nomination in a major category, but “House of Cards” is among the contenders for an outstanding drama series nomination and “Arrested Development” for outstanding comedy series.

Both series have award histories.

“Arrested Development” received 22 Primetime Emmy nominations and six Emmys, including as outstanding comedy series in 2004, during its 2003-2006 run on Fox.

In the outstanding comedy series category, ABC’s “Modern Family,” the winner each of the past three years, is a virtual certainty for a nomination.

Other contenders for the category’s six nominations include FX’s “Louie,” the Writers Guild Awards winner; HBO’s “Girls” and “Veep”; CBS’ “The Big Bang Theory”; and NBC’s “Parks and Recreation.”

CBS’ “The Amazing Race” has received the Emmy for outstanding reality-competition program for nine of the 10 years it has been awarded and is expected to be nominated again, along with Bravo’s “Top Chef,” the only other program to win in the category.

ABC’s “Dancing With The Stars” and “Shark Tank”; NBC’s “The Voice” and Lifetime’s “Project Runway” are also among the contenders for the category’s six nominations.

The other rule change has split the stunt category into two, with outstanding stunt coordination for dramas/movie and miniseries and comedies separately awarded.

Aaron Paul, a two-time Emmy winner for his portrayal of methamphetamine manufacturer Jesse Pinkman, and “House of Cards” cast member Kate Mara will join Bruce Rosenblum, the chairman and CEO of the Academy of Television Arts & Sciences, in announcing the nominees in the top categories in a ceremony at the academy’s North Hollywood headquarters beginning at 5:40 a.m. Thursday.

The reason for the early start is to allow the nominations to be shown live in the Eastern and Central time zones on the morning news programs.

The 64th annual Primetime Emmy Awards, which honor programming initially airing between 6 p.m. and 2 a.m. from June 1, 2012, to May 31, 2013, will be presented Sept. 22 at the Nokia Theatre with Neil Patrick Harris as the host.

The ceremony will be televised on CBS.

The bulk of the Primetime Emmys will be presented at the Creative Arts Emmy Awards ceremony Sept. 15, also at the Nokia Theatre.