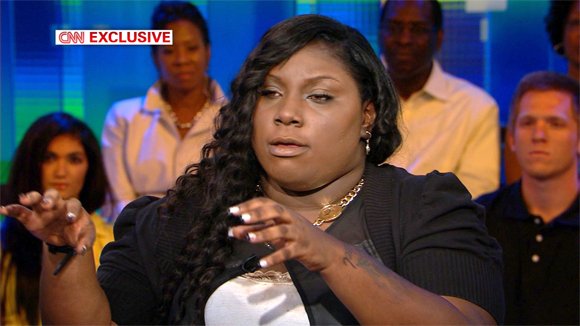 Martin friend 'upset, angry' by verdict Rachel Jeantel, the friend who was on the phone with Trayvon Martin when his fatal confrontation with George Zimmerman began said Monday she is "disappointed, upset, angry, questioning and mad" at Zimmerman's acquittal on murder charges. Rachel Jeantel called the verdict "BS" and said Martin, 17, was never aggressive. "He was a calm, chill, loving person who loved his family, definitely his mother, and a good friend," Jeantel told CNN's "Piers Morgan Live." CNN

The friend who was on the phone with Trayvon Martin when his fatal confrontation with George Zimmerman began said Monday she is “disappointed, upset, angry, questioning and mad” at Zimmerman’s acquittal on murder charges.

“He was a calm, chill, loving person who loved his family, definitely his mother, and a good friend,” Jeantel told CNN’s “Piers Morgan Live.”

Zimmerman, a neighborhood watch volunteer in Sanford, Florida, was acquitted Saturday of second-degree murder charges in Martin’s death. The killing sparked protests when police declined to bring charges against Zimmerman, leading to the appointment of a special prosecutor who eventually took the case to court.

Prosecutors had argued that Zimmerman, who is Hispanic, had profiled and pursued the African American teen.

As the last person to speak to Martin, Jeantel was one of the prosecution’s key witnesses. On the witness stand, she described how Martin told her over the phone that some “creepy-ass cracker” was following him and how he turned toward Zimmerman and asked, “Why are you following me for?”

Zimmerman had called police to report Martin as a suspicious person in his neighborhood. The unarmed Martin was wearing a hooded sweatshirt and was staying with his father at the nearby home of his father’s girlfriend.

Jeantel dismissed arguments that the case had no racial dimension.

“It was racial. Let’s be honest, racial. If Trayvon was white and he had a hoodie on, would that happen?” she asked.

Zimmerman told detectives Martin began pummeling him when he approached him, against the advice of a police dispatcher, and that he had to shoot to save his own life. He didn’t testify during the trial, however — and Jeantel said his defense was “acting like a punk” by attempting to paint Martin as a mortal threat.

“If you were a real man you would have stand on that stage and tell what happened,” she said, calling Zimmerman “weak” and “scary.”

Zimmerman’s lawyers successfully argued for the right to present evidence that Martin had marijuana traces in his system, but never brought that before a jury or presented any testimony about whether the drug could have affected Martin’s behavior.

The 19-year-old found herself in the unforgiving spotlight of a nationally televised trial, in which viewers criticized her for her dress, her weight and her speech and her combative manner on the stand. She admitted to lying about her age and her reasons for skipping Martin’s funeral.

She later explained she is of Haitian descent and grew up speaking Spanish and Creole, and she said Monday that her speech was also affected by an underbite that will require surgery to correct.

A juror who spoke to CNN’s “Anderson Cooper 360” on Monday said she had difficulty understanding Jeantel and didn’t consider her a credible witness, “but I felt very sorry for her.”

“She didn’t ask to be in this place. She wanted to go. She wanted to leave she didn’t want to be any prat of his jury I think she felt inadequate toward everyone because of her education and her communications skills. I just felt sadness for her.”