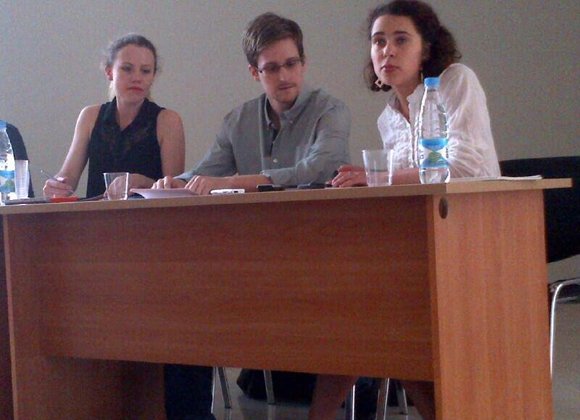 Putin’s comments on Snowden, made during a conversation with Russian Geographical Society students, came after Snowden told human rights activists and lawyers Friday that he wants temporary asylum while he awaits safe passage to Latin America.

Putin had said earlier that Snowden would have to “stop his work aimed at harming our American partners” if he wanted to stay in the country. That reportedly prompted Snowden to withdraw an asylum request in early July.

But on Friday, Snowden reportedly said that he will not harm the United States in the future.

“(Snowden) knows about the conditions about getting a political asylum,” Putin said Monday, according to RIA Novosti. “Judging by his latest statements, he is shifting his position somewhat, and the final outcome is still unknown.”

Snowden, a former National Security Agency contractor, leaked documents to the media that exposed U.S. mass surveillance programs. After he publicly identified himself as the leaker last month, he left Hong Kong for Russia, where he is believed to have been holed up in a transit area of Moscow’s Sheremetyevo International Airport.

Snowden has been technically a free man while at the Moscow airport but has been unable to travel after U.S. authorities revoked his passport when the United States charged him with espionage.

Vyacheslav Nikonov, a Russian lawmaker who was at Snowden’s meeting on Friday, told state news agency Itar-Tass that Snowden had said he did not intend to cause any further damage to the United States.

“I’ve said all I knew and I will not harm the United States in the future,” Snowden said, according to Nikonov.

Over the weekend, a journalist who first published the leaked documents said that Snowden has more damaging information that could be a “nightmare” for the U.S. government.

Glenn Greenwald of the Guardian told an Argentine newspaper, La Nacion, that releasing more information to hurt the United States is not Snowden’s goal. However, he said, Snowden has a “large number” of documents about software people use “without consciously agreeing to surrender their rights to privacy.”

Snowden has given copies of the papers to several people, Greenwald told the paper, according to an English translation.

“The U.S. government should be on their knees every day praying that nothing happens to Snowden, because if something happens, all information will be revealed and that would be their worst nightmare,” he said.utin:

Putin also told the students Monday that Snowden came to Russia without invitation, and flew to Moscow only to get a flight to another country, RIA Novosti reported.

He added that the United States essentially trapped Snowden in Moscow’s airport by revoking his passport.

“The U.S. threatened all other countries. No one wants to take him, so they trapped him in our country,” Putin said, according to the Russian news agency.

The presidents of Venezuela and Bolivia have said their countries would give him asylum, and Nicaragua’s president said he would offer it “if circumstances permit.”