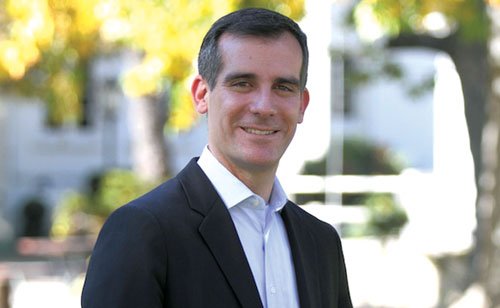 LOS ANGELES, Calif. — In the aftermath of Southland protests over the acquittal of a Florida neighborhood watch captain who killed 17-year-old Trayvon Martin, Mayor Eric Garcetti cut short an East Coast trip and planned to return to Los Angeles today.

Garcetti was scheduled to be in Maryland today to take part in “transition-related meetings,” but will instead be flying into LAX this afternoon from Dulles International Airport, just outside Washington, D.C., according to mayoral spokesman Yusef Robb.

The mayor decided Sunday, “out of an abundance of caution,” to head back to Los Angeles, Robb said.

Garcetti made a stop in Pittsburgh this weekend to visit family.

Los Angeles police officers were on citywide tactical alert this weekend as demonstrators protested the acquittal of George Zimmerman, whose attorneys successfully argued that their client shot Trayvon Martin in self-defense, fearing for his life amid a fight between the two that developed after Zimmerman began following the teenager, who was walking home from a convenience store.

The case has fueled a national debate about race, guns and Florida’s “stand-your-ground” law that broadens the definition of self-defense and the legal scope of the use of firearms in exercising it.

Garcetti was “briefed by Chief (Charlie) Beck and was in constant contact with his staff” during weekend protests, Robb said, adding the mayor left for his trip to the East Coast Saturday afternoon. The verdict in the Zimmerman case was handed down that day, following a 16 hours of deliberation by jurors.

The mayor called for peaceful demonstrations via a Twitter message Sunday, writing, “Nonviolence is a powerful&just weapon ... It is a sword that heals-MLK. Exercise 1st Amendment and practice peace in City of Angels tonight.”

At least one protester was arrested in Los Angeles over the weekend, and at one point a group of about 300 to 400 protesters marched onto the San Bernardino (10) Freeway near Crenshaw Boulevard, stopping traffic for close to half an hour.

Police fired bean bags at the protesters to force them to disperse onto a street near the freeway, LAPD officials said. Some demonstrators said in media reports that officers also fired rubber bullets in an effort to clear the crowd.