Why this verdict? Five problems that led to Zimmerman’s acquittal 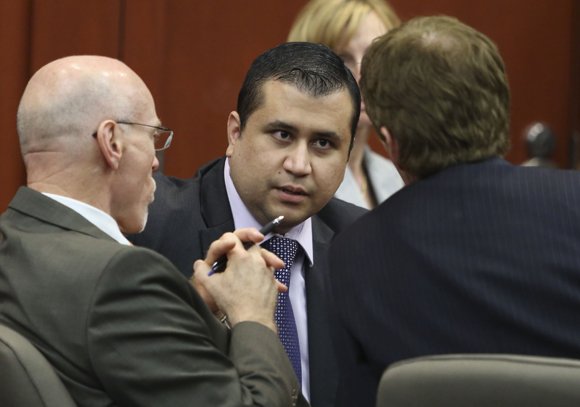 Jury finds George Zimmerman not guilty George Zimmerman talks to his attorneys Don West, left, and Mark O'Mara late in the day during jury deliberations in his trial in Seminole circuit court in Sanford, Fla. Saturday, July 13, 2013. Zimmerman was charged with second-degree murder in the fatal shooting of Trayvon Martin, an unarmed teen, in 2012. Zimmerman says he shot Martin in self-defense after Martin attacked him. Joe Burbank

Did the prosecution make a mistake filing a second-degree murder charge? Florida State Attorney Angela Corey says the allegations “fit the bill” for the charge Were their problems with the evidence?

There were five key problems in the case against George Zimmerman, leading to his acquittal Saturday in last year’s shooting death of 17-year-old Trayvon Martin:

Did the prosecution make a mistake in filing a second-degree murder charge against Zimmerman?

No, Florida State Attorney Angela Corey told reporters after jurors found him not guilty in the killing.

The allegations, she said, “fit the bill” for the charge.

Second-degree murder is defined as a killing carried out with hatred, ill will or spite, but is not premeditated.

There were repeated questions on whether the charge was appropriate because knowing a person’s feeling during a killing is difficult to prove.

As a result, the prosecution had to rely on the evidence to tell the story of what happened and what led to the shooting, according to HLN’s Ryan Smith.

Without an abundance of evidence, proving the case was difficult for both sides.

Zimmerman’s account of what happened the night of the shooting was a central part of the trial. He was the only living person who witnessed the entire incident, and there wasn’t much physical evidence for either team to fall back on.

Much was made during the trial about why there was so little blood on Martin and Zimmerman, who said he fired in self defense because he was being beaten and feared for his life.

Dr. Vincent Di Maio, a former medical examiner in San Antonio and expert on gunshot wounds, testified that the rain could have washed away and affected evidence collected from Martin’s hands.

There was so little evidence available that the defense put together an animated video to re-enact the events of that night based on witness statements, police reports and Zimmerman’s account, they said.

The judge ruled against the use of the video.

Considered a key prosecution witness because she was on the phone with Martin moments before he was shot, Rachel Jeantel initially resisted coming forward.

“She did not want to get involved in this in no way possible,” Martin family attorney Benjamin Crump told reporters Saturday.

During two days of testimony that was at times tense and combative, Jeantel described her conversation with Martin.

Jeantel testified that Martin told her he was being chased by a “creepy-a*cracker.”

The mothers of Zimmerman and Martin both testified that screams for help heard on a 911 call the night of the shooting were those of their sons, respectively.

On July 5, in a packed courtroom, the prosecution played the recording for Martin’s mother, Sybrina Fulton.

When asked if she recognized the voice, Fulton said it belonged to “Trayvon Benjamin Martin.”

Hours later, the defense called Gladys Zimmerman to the stand, where she testified the voice screaming for help belonged to her son.

As a result, there was no definitive answer for jurors.

The lead detective in the case, Chris Serino, appeared to hurt the prosecution more than help it with his testimony.

Serino told the court that he believed Zimmerman exaggerated the number of times he was hit that night but didn’t feel any “active deception.”

“Either he was telling the truth or he was a complete pathological liar,” he testified