A lot of musical extras thrown in 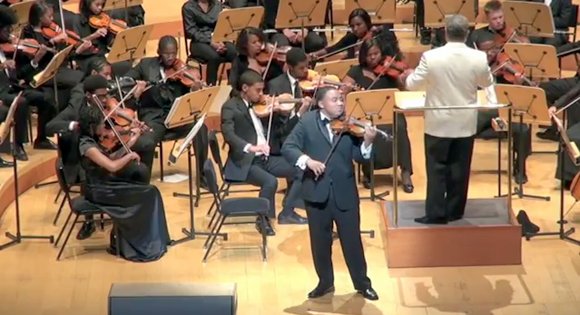 In its final concert for the season, the Inner City Youth Orchestra of Los Angeles (ICYOLA) proved that it is a musical ensemble that can artfully juxtapose the formality of the Classical music with the freedom and joviality of Pop. As an extra measure, it threw in a bit of terpsichore.

The program on Sunday at the lavish Walt Disney Concert Hall in downtown Los Angeles opened with the film score from Jerome Moross’s “The Big Country,” followed by about a 15-minute break to salute several honorees. It then launched into Nikolai Rimsky-Korsakov’s “Procession of the Nobles.”

A huge hit before intermission was Ludwig Van Beethoven’s “Symphony No. 5 in C Minor,” better known to most as Beethoven’s 5th. The audience, which had pretty much filled the wood-paneled hall, responded with a rousing ovation at the stirring conclusion.

But after intermission things changed.

“You guys thought because you were coming to an orchestral concert you were just going to hear Classical music,” said ICYOLA Director and Conductor Charles Dickerson. “I hope you brought your dancing shoes.” With that he turned to the orchestra, now aided by a rhythm quintet, and began its Michael Jackson Tribute, beginning with “Wanna Be Startin’ Something.’”

“Don’t Stop ‘til You Get Enough” featured saxophonist Curtis Brooks, who put on a show of twisting moves with his wailing sax.

But “Billie Jean,” which again featured Brooks on saxophone, offered something the audience wasn’t expecting—four and a half Michael Jackson clones in the person of Scorpio, Lematiq, Emjay, MJ Legacy and one unnamed little tyke.

One after another, in their own impressive dance solos, they revived awe-inspiring moves that Michael made so well known as they glided across the stage, seemingly without effort.

The finale consisted of Michael’s “Heal the World,” a sober reminder of the King of Pop’s deep compassion for humanity.

Several of the Jackson tunes were aided by the Inner City Youth Orchestra Chorus of about 30 members.

While much of the orchestra’s support comes from Toyota, Wells Fargo Foundation and United Parcel Service, it was a pleasant revelation to find that a considerable amount came from such churches as Trinity Baptist, Holman United Methodist, Grace United, Second Baptist and Knox Presbyterian.

Their investment, it seems, was well spent.

Behind the scenes at ICYOLA's 2013 season ending concert

Behind the scenes of the Inner City Youth Orchestra of Los Angeles as they prepare to performa at the Walt Disney Concert Hall for the 5th annual season ending concert.