Firearms expert says shot could not have been accidental 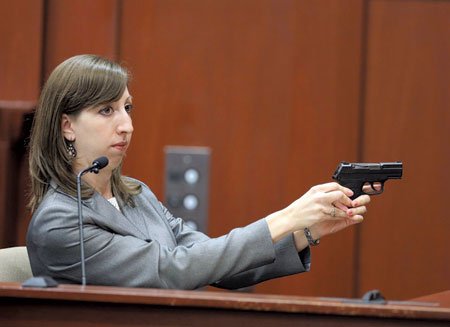 SANFORD, Fla. — Prosecutors in the George Zimmerman trial presented evidence of DNA test results to the jury Wednesday that showed where Zimmerman’s and Trayvon Martin’s genetic material ended up during their 2012 altercation.

Anthony Gorgone, DNA lab analyst for the Florida Department of Law Enforcement, methodically walked the jury through the results of his DNA testing of Zimmerman’s gun, the clothing both individuals wore the night of the shooting and scrapings from Martin’s fingernails.

Zimmerman did not show any emotion as Gorgone testified, but he appeared to be paying close attention.

Martin was also wearing a gray sweatshirt under his hooded jacket. Gorgone said two stains on that sweatshirt matched both Martin’s and Zimmerman’s DNA.

During cross examination, defense attorney Don West pointed out that Martin’s sweatshirts were wet from rain the night of the shooting, and they were not allowed dry before they were stored in plastic bags. Gorgone said if wet evidence is not left to air dry before being stored in plastic, mildew can degrade DNA evidence.

West asked, “Frankly then you just didn’t find much of anything on this gray hooded sweatshirt when it boils right down to it?”

“Just that partial profile on stain A” said Gorgone.

West asked, “That was the shirt that stunk to high heaven?”

Records admitted into evidence on the eighth day of testimony included a letter rejecting Zimmerman’s application to be a police officer in Virginia in 2009 because of his credit issues. A release form filed with the Sanford Police Department lists Zimmerman’s reason for wanting to ride along with them as to “solidify my chances of a career in law enforcement.” Records also indicate Zimmerman applied for a diploma in criminal justice in 2011 at Seminole State College in Florida.

The instructor who taught Zimmerman’s criminal litigation class testified Wednesday that he covered Florida’s self-defense laws extensively, even though there was no mention of them in the course book. “It’s not one of those things that you’re just going to whisk through in a day,” said Alexis Carter, who is now a military prosecutor.

The testimony seemed to counter a key claim that Zimmerman made last year in a Fox News interview that was replayed in court: that he didn’t know about Florida’s “Stand Your Ground” laws until after the shooting.