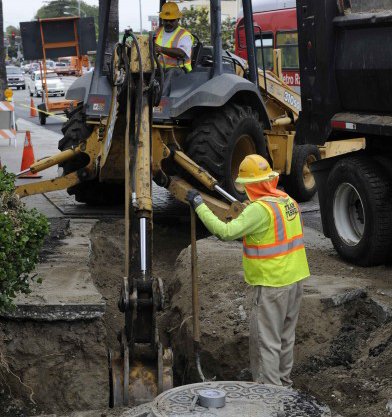 Work being done along Crenshaw Boulevard in preparation for the Crenshaw Rail Line. Photo by Gary Leonard for Metro

The construction of the Crenshaw/LAX rail line is projected to create 7,500 construction jobs with at least 3,000 of the workers coming from South Los Angeles and other impoverished areas.

The approval will be the catalyst for the start of a Construction Careers policy designed to put more South L.A. residents to work.

The 8.5-mile light rail line will run between the Expo Line, which travels east-west along Exposition Blvd., and the Metro Green Line, offering “an alternative transportation option to congested roadways and significant environmental benefits,” according to the MTA. The MTA said utility location is already under way and heavy construction is expected to start in spring 2014.

“By connecting these communities to the rest of the county, we hope that it will draw more business and economic development opportunities, resulting in more jobs for the area,” said Jackie Cornejo, Construction Careers Project director at Los Angeles Alliance for a New Economy (LAANE).

The length of the construction jobs depends on the worker’s trade, said Cornejo, who indicated that once their work is complete on the Crenshaw/LAX line, workers will be referred by their union to other job sites covered by LAANE policies to “ensure continuous employment.” Cornejo said the project is publicly funded, so state mandated wages and benefits are based on trade, but the wages are well above minimum wage.

“We hope and expect that Walsh/Shea will adhere to the standards set out by the Construction Careers Policy at Metro, ensuring that our communities have a shot at a career in the construction trades and adhere to the wage and benefits required,” she said.

“Metro is the first transit agency in the country to adopt a Construction Careers policy that targets communities that were hit the hardest by the recession and most in need of good, new jobs,” said Allison Mannos, a LAANE communications specialist, in a statement. “The Construction Careers policy requires that 40 percent of the jobs created go to workers from areas with high unemployment and at least 10 percent to disadvantaged workers, which includes veterans and those who have received public assistance.”

However, Drexell C. Johnson, executive director and founder of the Young Black Contractors Association Inc., relates this story about the contractor:

“Approximately four months ago, I went to Chicago to meet with Walsh’s office,” he said. Johnson said he met with an African American who was the outreach coordinator, compliance officer, and human resource manager who handled all these areas in all 50 states without an assistant.

“I told him with all the outreach that you guys claim you do, why haven’t you met with us?” said Johnson. “He said ‘we could not do that because the company didn’t have the job yet.’ I said, ‘It’s apparent you’re going to get the job because you’re the low bidder.’ But even today he hasn’t called me back,” said Johnson. “He told me the Urban League is the conduit responsible for their outreach. My point is, it’s the same old game being run by these big contractors. But if they think they’re going to build the Crenshaw project right in front of the Young Black Contractors’ office without Black labor they have another think coming.”

Johnson also said he met with Turner Construction Co. a couple of weeks ago about the Wilshire Grand Tower being built at Wilshire Boulevard and Figueroa Street. “They didn’t have one Black worker on the project other than one Black woman doing community relations,” he said. Johnson said he and several other Black contractors would be demonstrating at the project today from 9 a.m. to 11 a.m.

The funds for the Crenshaw project come partially as a result of Measure R, which was approved in November 2008 by two-thirds of Los Angeles County voters. It commits a projected $40 billion for transportation upgrades and traffic relief throughout Los Angeles County over the next 30 years. Metro construction projects total more than $70 billion in infrastructure investments, including those funded by Measure R. Those projects were expected to create more than 260,000 construction jobs in the county. Over the next five years, approximately $6 billion in transit projects will be built, creating over 23,000 jobs.

“I am committed to ensuring economic opportunities and benefits for those who live, work and trade in the heart of South Los Angeles,” said Los Angeles County Second District Supervisor Mark Ridley-Thomas in a statement. “That is why I championed both a project labor agreement and construction careers policy that ensures that at least 40 percent of the total construction hours to build the Crenshaw/LAX line are provided by residents who reside in neighborhoods where unemployment is high.”

LAANE spokespersons said the organization is working directly with South Los Angeles churches, community groups, work source centers and welfare offices to reach those in need of employment in the African American community. In the early fall, they expect to launch an on-the-ground outreach campaign aimed at the South Los Angeles African American community, which will be linked to these construction opportunities.

According to the California Labor Market Information division, the seasonally adjusted unemployment rate for L.A. County was 9.2 percent in May 2013. The national rate was 7.6 perecent and 13.5 percent for African Americans.

According to the Bureau of Labor Statistics, the overall unemployment rate in the Los Angeles metropolitan area was 8.3 percent as of May 2013.