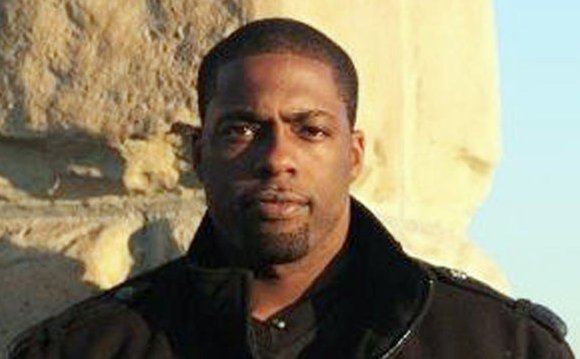 The NFL dream of a former Long Beach high school football star who spent more than five years behind bars for rape but was exonerated after his accuser recanted her story came to an end today — at least for now — when he was cut by the Atlanta Falcons.

Brian Banks, 28, was released by the team, which must reduce its roster to 53 by Saturday. Banks signed with the team in April and played in several pre-season games.

After Thursday night’s game against the Jacksonville Jaguars, Banks told reporters he was grateful for the opportunity to play. His mother attended the game and was even able to be on the field during pregame warm-ups.

“She never had that experience before, so she was a little choked up not really knowing what to expect,” Banks said. “But just to have her here, have her in town and get her onto the field and take pictures with her and just show her a little bit of what I’ve been up to the last few months is more than I could ask for.”

Asked to describe the highs and lows of training camp, Banks said, “Everything’s been highs for the most part. I’ve already had too many lows.”

He said he was “fully consumed in trying to make this team, trying to catch up to all the years that I missed out on football.”

“My learning curve is definitely different from a lot of guys here,” he said. “Whereas I was learning a lot of the one-on-one basic things of football as well as the intermediate things of football, and mesh it all together at once ... in a small period of time, so it was definitely challenging, but overall I enjoyed myself the whole time.”

Banks was exonerated in May 2012 after a judge in Long Beach agreed to throw out his 2003 conviction for forcible rape involving a girl on the campus of Long Beach Polytechnic High School a year earlier. Banks had dreamed of playing professional football and was expecting to attend USC on a football scholarship when he was arrested.

Although he received some interest from NFL teams since his release — including from former USC coach Pete Carroll, now the head coach of the Seattle Seahawks — Banks went unsigned until the Falcons picked him up in April.

Banks was 16 when he was accused of rape on July 8, 2002, and 17 when he pleaded no contest to forcible rape in exchange for a six-year sentence — considerably shorter than the 41-year-to-life term he could have faced if he had gone to trial and been convicted.

Last year, however, the alleged victim reached out to Banks and admitted she had lied, leading to his exoneration.

Fox Sports reported that despite the team’s decision to cut Banks, Falcons owner Arthur Blank was so impressed with him that he may try to find him a job with the team — possibly in a community relations capacity or even on the team’s practice squad.