Warnings of a Syrian quagmire as U.S. contemplates military strike 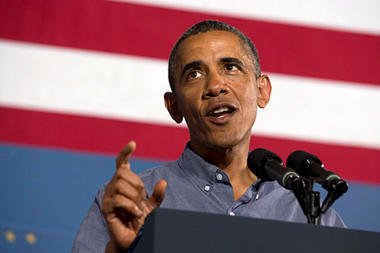 Haven’t we heard this before?

With President Barack Obama examining how—not whether—the United States will respond to what it calls a major chemical weapons attack in Syria, some are warning of another potential open-ended war if America launches an expected military strike.

While noted hawks such as GOP Sen. John McCain of Arizona call for a robust response intended to weaken Syrian President Bashar al-Assad and turn the tide of the nation’s civil war, others worry that the inevitable result will be an inextricable mess.

“Just shooting in some missiles isn’t really going to take care of the situation and might aggravate the situation,” Democratic Rep. Loretta Sanchez of California told CNN Tuesday. “You have Syria tied to Iran. You’ve got the Hezbollah in neighboring Lebanon. The whole area is already a difficult area. You have refugees going into other countries.”

Sanchez, who sits on the House Armed Services Committee, added that “for Americans to believe that just by shooting a few cruise missiles, we’ve made our statement and away we go, it’s just not the way that I believe this plays out, if that happens.”

Her fellow California Democrat, Rep. Adam Schiff of the House Intelligence Committee, said the large-scale use of chemical weapons demanded an international response, but he called for a precisely defined mission intended to limit collateral political fallout or open-ended U.S. involvement.

“I think the use of chemical weapons is really different, qualitatively different, tragically different, and I think we really have to act here,” Schiff told CNN. Obama must “make it clear not only to the American people, but also to the Syrian people, that this isn’t going to be the cavalry riding to the rescue to topple” Assad, he said.

At the same time, “this is going to be a punitive, powerful response, a deterrent response to the use of chemical weapons,” Schiff said.

“That’s important to make sure that we don’t get entangled in this war, to try and avoid the consequences” cited by Sanchez, he added. “But I think properly defined, it can be done. And I think it will be done in concert with our international partners.”

McCain told CNN in a separate interview that only a tough response will be effective.

“If it’s just some strikes with cruise missiles, then it will not only not do any good, it may be counterproductive and help Bashar Assad with his propaganda,” McCain said. He called for reversing the advantage held by Assad’s forces on the battlefield “by taking out his air assets, cratering his runways, and getting the weapons to the right people so that they can reverse the momentum.”

However, Ed Husain of the Council on Foreign Relations said Obama risks wading into a protracted war that will become his legacy with hasty military strikes now.

“By intervening, Syria may well prove to be Obama’s war, bequeathed to a new president in 2016,” Husain, a senior fellow for Middle East studies, wrote Wednesday on CNN’s website. “Civilian casualties are inevitable: The images on our screens will not be Syrians using chemical weapons to kill each other, but American bombs creating carnage and killings in yet another Muslim country.”