After the March on Washington 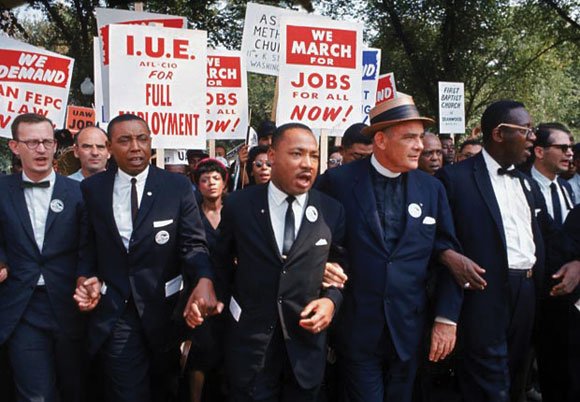 The 1963 March on Washington was a pivotal moment for African Americans, a day when people joined to fight for jobs, peace and justice. More than 250,000 people traveled to Washington, coming by busses, trains, and occasionally planes.

They came despite the scourge of segregation, which meant that many who were driving had to carefully select the places they could stop and eat (actually most brought goodies from home) or relieve themselves. Despite obstacles, a quarter of a million people showed up in Washington, gathering peacefully and with dignity.

As a result of the march, the Civil Rights Act was passed in 1964, and the Voting Rights Act of 1965 was passed with more than three-quarters of the House and Senate supporting both acts.

Dr. Martin Luther King Jr. continued his activity for jobs, peace and justice helping to organize the march from Selma to Montgomery in 1965, which resulted in Bloody Sunday. He spoke, in 1965, to Playboy magazine, suggesting that “compensation” (he didn’t use the word reparations) would be the only way to close the economic gap between African Americans and Whites. He began connecting poverty with war in his 1967 speech “Beyond Vietnam.”

When he died, he was organizing the Poor People’s Campaign, envisioned as a way to bring tens of thousands of people to Washington, D.C., to demand that each department of the federal government recognize and ameliorate poverty issues in housing, education, health, and other areas. The Poor People’s campaign was more muted than expected in the wake of Dr. King’s 1968 assassination, but some of the people came anyway.

In 1963, the movement had clear goals. African Americans had been denied employment rights, civil rights, civil liberties and voting rights. The hundreds of thousands of African Americans who came to Washington were protesting, not only the restoration of these rights, but also a stop to the police brutality that had killed or crippled thousands of African Americans and our supporters. People were so focused that change was made, and when Dr. Martin Luther King Jr. accepted the Nobel Peace Prize in 1964, he articulated his vision for our nation. He said: “I have the audacity to believe that peoples everywhere can have three meals a day for their bodies, education and culture for their minds, and dignity, equality and freedom for their spirits.”

He set out an agenda that was economic, social and political. Fifty years after the March on Washington, we have yet to achieve the metrics that Dr. King offered. Millions experience “food insecurity,” or have nothing to eat several times a month. The education gap has not been closed, and African American students are differently treated than others in the K-12 education system. Where is the equality?

Paraphrasing Dr. King, African Americans have twice the negatives and half of the positives in terms of equity. Little freedom has been achieved, especially when trillions are spent on senseless wars, while our national unemployment rate exceeds 7 percent and the unofficial Black unemployment rate is 25 percent.

In the five years after the 1963 March on Washington, there were setbacks, but also the achievement of far-reaching goals. After the commemoration, the several events in Washington, D.C., parallel events in other cities, and the NAACP’s online march, what will be the results? Will this generation be as effective as Dr. King and his generation was? Will we mobilize around Voting Rights after the setback of a Supreme Court decision? Will we push to close the employment gap between African Americans and others?

In 1963, African Americans were desperate to effect change. In 2013, there is neither desperation nor a passionate push for implementation. In five or 10 years, when there is another commemorative gathering, how will history judge us?

Julianne Malveaux is an economist and author in Washington, D.C.