'March on Washington for Jobs and Freedom' 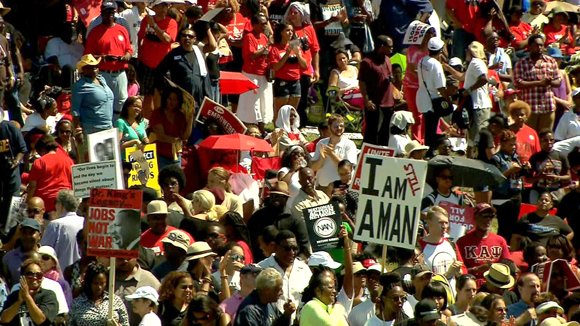 Thousands rallied at the National Mall Saturday, August 24, 2013, to mark the 50th anniversary of the historic August 28, 1963, March on Washington.

Here’s a look at what you need to know about the 1963 March on Washington, led by Rev. Martin Luther King Jr. and others. The 50th anniversary of this historic event is August 28, 2013.

The event was officially titled the “March on Washington for Jobs and Freedom.”

Martin Luther King, Jr. gave his famous “I Have a Dream” speech at the Lincoln Memorial.

200,000-250,000 Americans, mostly African Americans, but including thousands of whites, held the march in order to focus attention on blacks’ demands for immediate equality in jobs and civil rights.

Law enforcement included 5,000 police, National Guardsmen and Army reservists. No marchers were arrested and no incidents concerning marchers were reported.