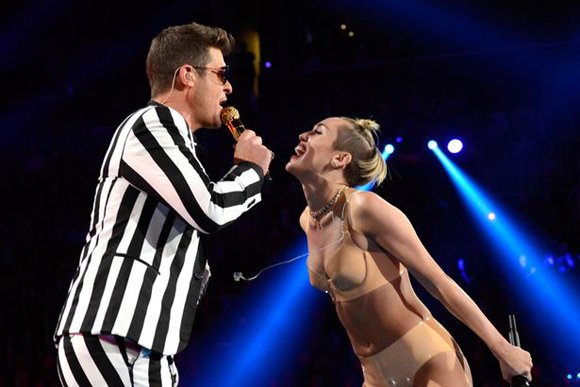 My list of reasons why I’m glad my girls, ages 5 and 7, were too young to ever get into “Hannah Montana” grew exponentially longer after Miley Cyrus’ unforgettable “twerking” in a bra and undies at MTV’s Video Music Awards).

“Miley, what exactly were you thinking?” pretty much sums up the sentiment I heard from outraged moms and dads around the country who believe Cyrus, whose loyal fan base includes a huge chunk not yet old enough to drive, should know better.

“It’s a damn shame that Miley is doing this to herself, making a vulgar joke out of her talents and her beauty, but it’s a much bigger shame that she’s doing it to her young fans and other young people (who) see her in the media,” said Heidi Cardenas, a mom of two teenage boys, in response to a request for comment on CNN’s Facebook page.

“It’s the same thing as going to any street corner in America and selling herself for money,” said Cardenas.

“I have to instantly think that Miley does not either a) care what her younger fans think of her or b) hasn’t even bothered to think of what her actions (are) doing to her image,” said Larene Grady, a mom of two whose tween was “absolutely infatuated” with Cyrus but isn’t anymore.

“She thinks Miley does not appeal to children (who) used to like her as ‘Hannah Montana,’ which speaks volumes coming from a 10-year-old who had two ‘Hannah Montana’ parties, everything from bed sheets, pajamas, bath soaps, toothbrushes and book bags,” Grady added, also in response to a tout on CNN’s Facebook page.

“Hannah Montana” seems about as relevant to the current day Cyrus as a typewriter is to millenials.

The 20-year-old has every right to chart a new course beyond her Disney days, moms and dads said in comments on Facebook and exchanges via e-mail. It’s just that the path she is choosing seems so wrong and dangerous, many said.

Sonia Prince of Nashua, New Hampshire, said her kids — ages 9, 12 and 13 — will no longer be listening to Cyrus’ music. “There is enough fantastic music out there with people who have respectful behavior, especially women who don’t feel the need to be sexual in public in order to be successful,” she added.

Cyrus’ choice to wear next to nothing and strut around the VMA stage is yet another example, frustrated parents say, of the sexualization of our young girls, an issue we touched on at CNN.com just a few weeks ago in our piece on how too many tween fashions are too sexy, skimpy and short.

“I do think Miley wrongly represents the way girls should act today,” said Steve, a CNN commenter who shared his first name and the fact that he has a 12-year-old granddaughter.

“The way they dress, act, not caring about how other people may respond to your actions,” Steve added. “I think it is an oversexualization of young girls/young women.”

Robin Belkin, a mom of three in Northern California, believes Cyrus’ performance only adds to the already “damaging image of women-as-sex-objects.”