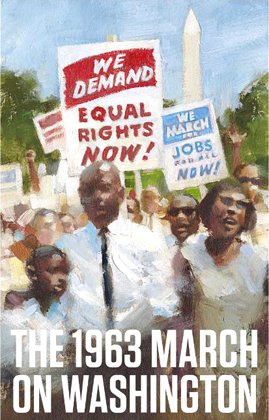 Equality has a stamp of its own today as the United States Postal Service (USPS) introduced the 1963 March on Washington limited-edition forever stamp to commemorate the 50th anniversary of the historic milestone. For the first time, the postal service unveiled the stamp with the help of people across the country. Throughout the month, individuals added their photo to the March on Washington stamp on the USPS’s Facebook page to help reveal a small piece of the stamp.

During today’s First-Day-of-Issuance ceremony at the Newseum in Washington, D.C., actress Gabrielle Union added her Twitter profile photo to the mosaic to reveal the final piece of the 1963 March on Washington stamp.

“It is so appropriate and so fitting for the United States Postal Service to issue this Forever stamp on the eve of the 50th anniversary of the March on Washington,” said Lewis. “The march was one of the turning points in the on-going struggle for civil rights and social justice in America. In the years to come, when individuals use this stamp, they will be reminded of the distance we have come and the progress we have made as a nation. And they will be reminded of the civic duty of every American to stand up for what is right in our democracy.”

“It’s an honor to be here in remembrance of the 50th anniversary of the 1963 March on Washington and dedicate a stamp that commemorates what Dr. King described as the greatest demonstration for freedom in the history of our nation,” said Stroman. “The U.S. Postal Service takes pride in being able to recognize historic events by issuing these limited-edition stamps commemorating the ‘Best of America.’”

Fifty years ago, on Aug. 28, 1963, nearly a quarter of a million people came together in Washington, D.C., to participate in the March on Washington for jobs and freedom. It was then that Dr. Martin Luther King Jr., delivered his powerful “I Have a Dream” speech on the steps of the Lincoln Memorial, a defining moment of the American Civil Rights Movement.

The 1963 March on Washington stamp is the last of three stamps issued this year as part of a civil rights series commemorating courage, strength and equality in America. The first forever stamp marked the 150th anniversary of the Emancipation Proclamation in January, while the second forever stamp honored Rosa Parks on the 100th anniversary of her birth in February.

An inspiring word appears in large type in the selvage of each civil rights stamp pane: “Freedom” on the Emancipation Proclamation stamp sheet. “Courage” on the Rosa Parks stamp sheet and “Equality on the 1963 March on Washington stamp sheet.

Stamp artist Gregory Manchess of New York City, depicts marchers against the background of the Washington Monument. Placards calling for equal rights and jobs for all — two principal themes of the march — are prominently displayed. Using broad strokes and painting with oils on gessoed illustration board, Manchess conveys an impressionistic effect of the historic occasion.

Early in the morning of Aug. 28, 1963, hours before the March on Washington for jobs and freedom was to begin, Courtland Cox, a top official from the Student Nonviolent Coordinating Committee, walked to the still-deserted National Mall with the chief organizer of the march, Bayard Rustin. In the quiet, as mist rose from the Reflecting Pool, Cox turned to Rustin and asked, “Do you think anybody’s coming?”

They came. They arrived by bus, train, and car. They bicycled from Ohio, hitchhiked from Alabama, and walked from Brooklyn. One young man roller-skated from Chicago. That day, some 250,000 people joined one another in the hope and belief that change was possible.

Wearing their Sunday best, carrying placards, linking arms and joining voices, they filled the National Mall from the Washington Monument to the long shadows of the Lincoln Memorial. In a peaceful gathering filled with music and hope, they gathered to listen to popular artists of the day sing songs of yearning and courage. Speakers from religious groups, labor unions, and major civil rights organizations talked of their belief that the time for change had come, was indeed, overdue.

Dr. Martin Luther King Jr., galvanized the watching nation with his dream of a day when “this nation would rise up and live out the true meaning of its creed: ‘We hold these truths to be self-evident, that all men are created equal.’” He envisioned a time when “all of God’s children will be able to sing with new meaning: ‘My country ‘tis of thee; sweet land of liberty….’”

The brainchild of labor leader A. Philip Randolph, a seventy-four-year-old veteran of battles against racial discrimination, the March on Washington was intended to be a call for strong civil rights legislation and policies such as a national living wage and a large-scale jobs program for the unemployed. More broadly, in King’s words, the march aimed “to arouse the conscience of the nation.”

It proved to be a milestone in the civil rights movement. Less than a year later, Congress passed and President Lyndon B. Johnson signed into law the Civil Rights Act of 1964, followed by the Voting Rights Act of 1965.