Regret that tattoo you got?, study shows your not alone 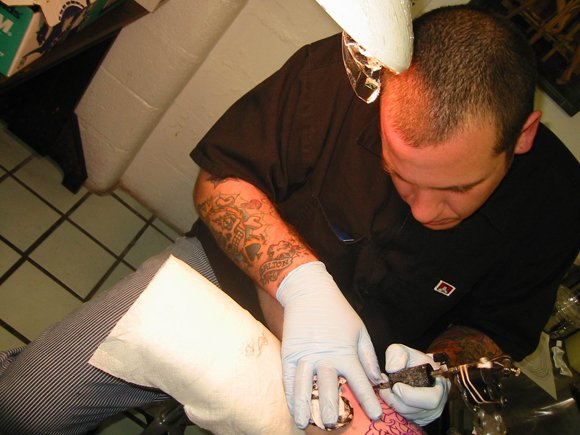 That tattoo on your arm of a former flame — the one that seemed like a great idea years ago — is kind of embarrassing today. And your spouse is not too crazy about it either.

You may not know that FDA considers the inks used in tattoos to be cosmetics, and the agency takes action to protect consumers when safety issues arise related to the inks.

At the other end of the tattoo process, FDA also regulates laser devices used to remove tattoos.

FDA has cleared for marketing several types of lasers as light-based, prescription devices for tattoo lightening or removal. A Massachusetts company recently received FDA clearance to market its laser workstation for the removal of tattoos and benign skin lesions.

According to a poll conducted in January 2012 by pollster Harris Interactive, 1 in 8 (14%) of the 21% of American adults who have tattoos regret getting one. And the American Society for Dermatologic Surgery (ASDS) reports that in 2011, its doctors performed nearly 100,000 tattoo removal procedures, up from the 86,000 performed in 2010.

Unfortunately, removing a tattoo is not as simple as changing your mind.

Artists create tattoos by using an electrically powered machine that moves a needle up and down to inject ink into the skin, penetrating the epidermis, or outer layer, and depositing a drop of ink into the dermis, the second layer. The cells of the dermis are more stable compared with those of the epidermis, so the ink will mostly stay in place for a person’s lifetime. Tattoos are meant to be permanent.

An effective and safe way to remove tattoos is through laser surgery, performed by a dermatologist who specializes in tattoo removal, says FDA’s Mehmet Kosoglu, Ph.D., who reviews applications for marketing clearances of laser-devices.

“Laser” stands for Light Amplification by Stimulated Emission of Radiation. Kosoglu says that pulsed lasers, which emit concentrated light energy in short bursts, or pulses, have been used to remove tattoos for more than 20 years.

However, it can be a painstaking process. “Complete removal, with no scarring, is sometimes not possible,” Kosoglu notes.

FDA clearance means this method for removing tattoos complies with agency requirements for safety and effectiveness, according to FDA dermatologist Markham Luke, M.D. Other methods include dermabrasion—actually “sanding” away the top layer of skin—and excision—cutting away the area of the tattoo and then sewing the skin back together.

How Does It Work?

With laser removal, pulses of high-intensity laser energy pass through the epidermis and are selectively absorbed by the tattoo pigment. The laser breaks the pigment into smaller particles, which may be metabolized or excreted by the body, or transported to and stored in lymph nodes or other tissues, Kosoglu explains.

The type of laser used to remove a tattoo depends on the tattoo’s pigment colors, he adds. Because every color of ink absorbs different wavelengths of light, multi-colored tattoos may require the use of multiple lasers. Lighter colors such as green, red, and yellow are the hardest colors to remove, while blue and black are the easiest.

“That depends on a person’s pain threshold,” Kosoglu says. Some people compare the sensation of laser removal to being spattered with drops of hot bacon grease or snapping a thin rubber band against the skin. A trained dermatologist will be able to adjust the treatment to the patient’s comfort level.

Generally speaking, just one laser treatment won’t do the trick. According to the American Academy of Dermatology, the procedure requires multiple treatments (typically six to 10) depending on a tattoo’s size and colors, and requires a few weeks of healing time between procedures. Some side effects may include pinpoint bleeding, redness, or soreness, none of which should last for long.

Luke says that these laser devices are cleared for use by, or under the supervision of, a health care professional. The removal procedure requires using the correct type of laser, understanding the reaction of tissue to laser, and knowing how to treat the area after the procedure.

“If you have any concerns about having a tattoo removed, it’s a good idea to consult your dermatologist, who is knowledgeable about laser treatments,” Luke concludes.

The ASDS has a list of dermatological surgeons who specialize in tattoo removal.

Consumers are asked to report adverse (negative) reactions from tattoos, as well as problems with tattoo removal, to FDA’s MedWatch.