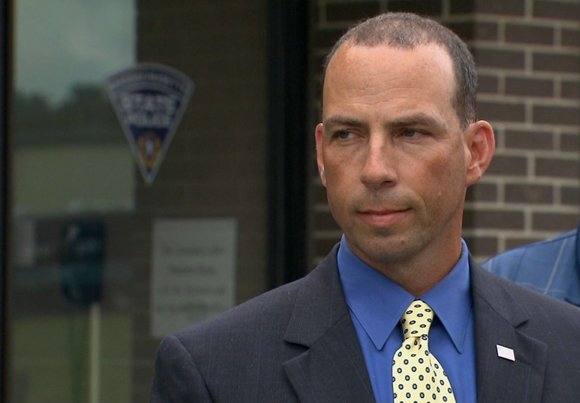 Massachusetts State Police sergeant Sean Murphy will be on desk duty pending the outcome of an internal investigation over his unauthorized release of photos showing the hunt and capture of one of the Boston bombing suspects.

A Massachusetts State Police sergeant, briefly suspended for giving a magazine photos of the hunt and capture of one of the Boston bombing suspects, has been reassigned as an investigation of his actions continues.

Sgt. Sean Murphy's recent move to a patrol barracks in Athol is not a demotion or punishment, State Police spokesman David Procopio said in a statement issued Thursday.

Boston magazine published the photos last month, along with a story quoting Murphy.

The sergeant said that a cover on Rolling Stone magazine was "an insult" to the victims of the April terror attack because, in his view, it didn't portray Dzhokhar Tsarnaev the right way.

Murphy was "furious" with the cover photo of Tsarnaev, the Boston magazine story said, so the sergeant, a tactical photographer, provided the publication with grittier pictures from the harrowing hours after the bombing.

These included an image of Tsarnaev during his capture with his face buried in his arm and what appears to be a red laser trained on his head.

Murphy "is under investigation for possibly violating departmental policy and regulations by releasing departmental material obtained in his media relations position without authorization," Procopio said.

Hours after the Boston magazine story appeared online, Murphy was suspended with pay for a day, officials said. He was briefly placed on desk duty and then moved to the patrol division. His rank, pay and benefits are not affected by the investigation.

His department-issued photography equipment was taken away because of the nature of the allegation, Procopio said.