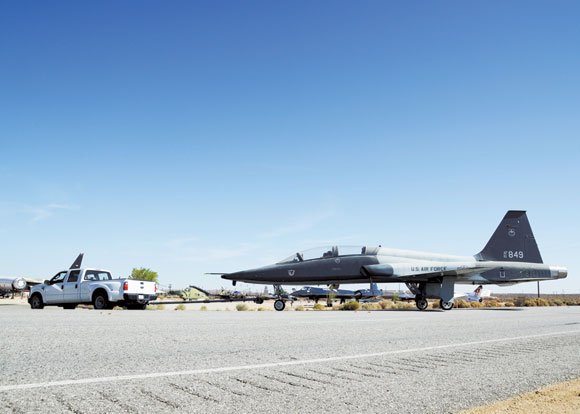 The Air Force Flight Test Museum at Edwards Air Force Base, Calif., brought three aircraft—a T-38A, a single-seat F-16XL and an X-4 Bantam—out of storage this week. Traffic was stopped as the aircraft made their way down Rosamond Boulevard to the museum. It was a rare treat for the bi-weekly general public tour given by the 412th Test Wing Public Affairs Office, which had tourists visiting the museum at the time.

“Coming on the tour we didn’t expect to be able to see planes driving into the museum, so we feel very honored that we were here at the right time and the right place,” said Jennifer Perot, tour attendee. “It was quite an experience.”

Her husband, Morris Perot, added, “It’s pretty cool to get a sense of the history just driving down the road.”

Prior to the move, the aircraft were stored at Hangar 1864, the museum’s restoration hangar. According to George Welsh, AFFT Museum curator, “The T-38 was in great shape.” He added that the aircraft had been adopted by a local Eagle Scout group, which volunteers to maintain its appearance.

Approximately 75,000 pilots, including virtually every Air Force pilot since 1961, have been trained in the T-38. After 50 years of service it is still training future pilots and used by the United States Air Force Test Pilot School here at Edwards.”

He added that the F-16XL, an experimental fighter, is a derivative of the F-16 that was used to explore the advanced cranked-arrow delta wing. Of the two that were built, the museum has the No. 1 bird.

After more than a decade of outdoor storage, the X-4 underwent a complete external restoration by a group of volunteers.

“The X-4, purely an experimental aircraft, is a late 1940 design that explored the flight characteristics of tailless aircraft in the transonic speed range. This aircraft is unique in that only one pilot, Charles Tucker, flew it during its entire career,” said Simone.

The X-4 now sits in the museum repainted in its original color scheme of red and light grey stripes. Northrop Grumman originally added the red stripes to improve visibility to the very small aircraft.

“Unfortunately the museum was closed,” said Underwood. “But, we were told that if we ever wanted to do something interesting with our time here, instead of just going out to Los Angeles or Vegas, we could talk to the museum curator and do some volunteer work.”

Underwood recalled first seeing the museum’s X-4, which now sits inside the museum, as being “pieces on trailers.” He explained that it had been outside for years and was in desperate need of restoration. “I actually got to see the thing being built from the ground up,” said Underwood.